I've been listening to lots of voices this week. Here are some links and what-not.


Another show I've been enjoying on BBC 6 Music of late is the short series presented by Underworld's Karl Hyde. He has played a lovely mix of music and sounds like a genuinely nice guy too. The last show was yesterday but you can catch it for a week or so (here).


Also we have been watching the newish BBC show "The Voice". We don't watch a lot of these competition shows but for various reasons we have ended up watching this one (no Cowell for a start - can't bear him - plus no ads). It is certainly not all good (last week's "battle rounds" were especially awful) but my goodness it was almost worth it all to hear this girl at the mike on Saturday. She is Ruth Brown and she is all of 20 years old. The song was written by Brenda Russell.

I also finished reading Gil Scott Heron's "The Last Holiday" recently (now there was a voice - one of the best - book's cover image at the top of this post). I've written about GSH a lot here and there and posted plenty of his songs too. This book is a real treat for fans as, for me at least, there was a lot about his early life and experiences that I didn't know much about already. Plus it is a memoir (if an slightly patched-together one) so you do hear his voice loud and clear, through the pages. And what a voice it was... here is a little dash of it (from his last album "I'm new here"):


I guess you might call that 'spoken word' (though that's not a phrase I use much). In chapter 19 he talks about how this part of his style developed (and particularly in relation to the Last Poets - themselves often quoted as early influences on hip hop):

I managed at least one trip per month to New York City... I got to know the The Last Poets, too, because Abiodun Oyewole's cousin went to Lincoln with me. I thought that they were bringing a new sound to poetry and to the community, and I enjoyed it. I was a piano player and played with different groups still, and the songs and poems that I had written had a musical tilt to them because they were compositions as opposed to just poems over rhythms. Their things were a cappella without music. I always had a band, so it was a different sort of thing. But we were trying to go in the same direction.

Whatever GSH did with that voice it sounded pretty good... though one thing that was interesting in the book was to learn how much he started off really wanting to be a writer, first and foremost. He was that too of course. 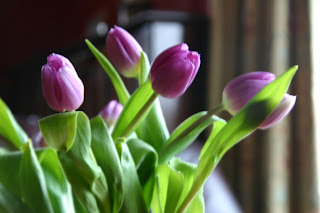 Just a quick one... a poem I wrote a couple of years ago that I've read out and about twice recently and had a few comments about. I guess it's not one that the poetry magazines will exactly snap up so it's not worth keeping it hidden away and all that. Instead... here it is: 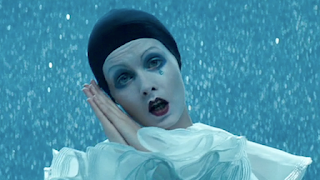 Still on songs (and ones from musicals in particular)...

In London the other week we took the young one to see the relatively new “Matilda the Musical”. It's a Royal Shakespeare Company production and it has been getting great press (it started in Stratford-upon-Avon but moved to London's West End at the end of 2011). Our girl loved the original Roald Dahl book and the excellent Danny DeVito movie so it seemed like a good choice of treat while we were down in the big city. Here's probably the stand-out song/tune from the beginning of the second half:

So did we like the whole thing? Does it deserve all the awards it won last week (at the Oliviers)? Well, yes... on the whole we did enjoy it... though if I was being totally honest, I'd have to say that quite a lot of it was a bit frantic for me (and I don't think it's just that I'm over 30). The songs were very good but I wanted to be able to hear them and often it was all so fast and manic that I just couldn't make out all the words (children's naturally high voices don't help with this either of course). Tim Minchin wrote all the songs for the project – hear him talking about the process  below (and remember we played his lovely Xmas song back here):

I like him more and more. I did have a few other little gripes with the show though (like, is it only me who gets uncomfortable when the stupid, horrible parents have OTT cockney accents and the lovely bookish daughter sounds, well, a lot more middle class and a lot less regional... though of course we only saw one of the four girls being Matilda in the current show). I'd say this production is largely made with kids in mind (that's obvious, I suppose and probably as it should be) but still... we parents are still there... and we think about these things (and we pay for the tickets...).

All that said there were some cracking dance numbers, the kids were all formidably good and I really did like most of the songs (there's a good one using the alphabet but that only works with the visuals on stage too). Maybe it's partly being in London that makes me feel weary and not up to the manicness.

On a completely different note I was asked a while ago to speak/read poems at the conference of a local group here called Angus Gold (all to do with activities/courses for the 50+ age group). The theme of the day was the health benefits of continued learning and so I sorted out a few poems I thought might fit the bill. Another song from a musical kept coming into my head though... this one from Sandy Wilson's “The Boyfriend” (girl and I watched the 1971 movie a little while back – it stars Twiggy, see photo above). This was the song in question:

So for the conference event I rewrote the lyrics to match the day (as below). Some bits are straight out of the song – others a bit more tweaked. I read it out in a kind of talking/singing style (think Telly Savalas “If a picture paints a thousand words...”) and it really went very well. People joined in and everything. Here's my version:

If they say you're past new tricks
You should answer "Never!"
The magic comes as you try out
Another fresh endeavour

The best of us can run and run
There's no such thing as too much fun
It's never too late to learn something
Sez who? Sez me
Sez you? Sez we.
Sez both of us together

The modern courses that you see
Are often most confusing
Assertiveness, time management,
Who knows just what you're choosing


It was fun to be back on a high stool, peddling some poetry again. 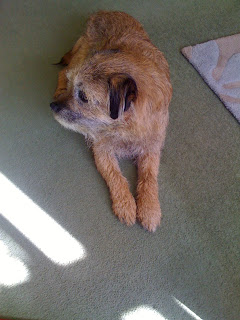 A couple of things seen in Leeds city centre yesterday...

In one of the many shopping centre/malls: 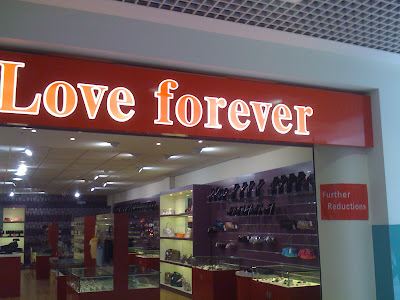 And in the old market: 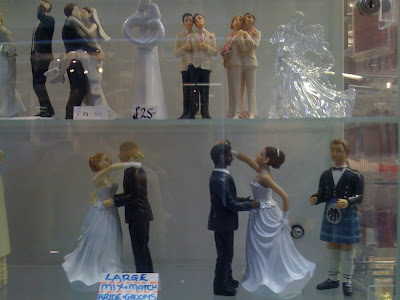 Very much enjoying being in England and visiting all the nearest and dearest. Looking forward to getting home for a rest! 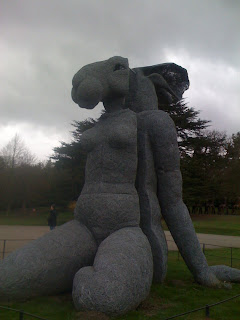 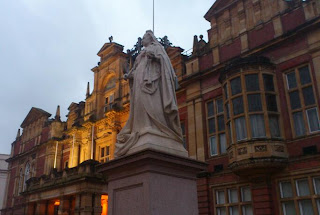 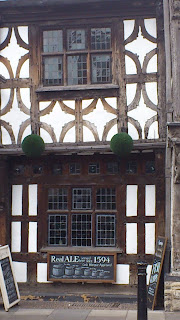 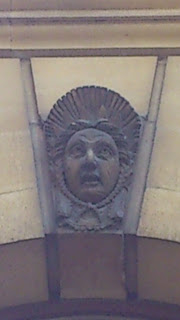 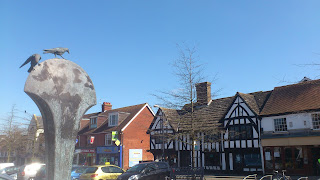