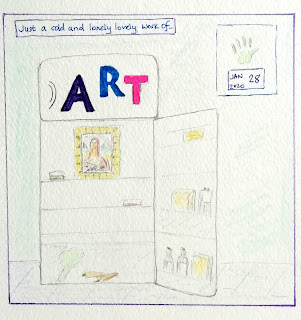 My FADD Post from 28 Jan 2020
In January this year I took part in the Fun A Day Dundee art project by producing a piece of art every day for 31 days and posting a photo of it online (mainly to Instagram and Twitter). This week there are online events to celebrate the project (which has been running in Dundee since 2011) so here are some more details about my contributions, specifically information about all the musical references. This is my idea of fun... I did used to be a DJ and music reviewer in a previous life after all.
Step 1
At the end of December 2019 I wrote a poem with 31 words and no word repeated. You can read the poem back here (or square by square on Instagram or further down this post).
Step 2
I did an illustration every day for January 2020 with a word from the poem at the centre and all kinds of references to songs/musicians. I posted one illustration every day to Instagram and Twitter. I have done very, very little drawing and illustrating in my life so this was really something new for me. If I had realised in January that I was going to use a 7 inch single format to display them I would have made my squares that size in the first place (I didn't, I randomly went for 15 cm squares instead).
Step 3
I started getting ready for the Fun A Day exhibition, got little record sleeves and was planning to display the illustrations (a) on the wall (as you see records displayed in record shops) and (b) in a little record box so you could flick through them (also like in record shops). I had some slightly enlarged versions of the illustrations printed by Urban Print so they would fit the record sleeve display idea better.
Step 4
The on-wall exhibition was cancelled due to you-know-what and this weekend there is an online exhibition instead (see samples of all the participants' work here). My new contribution is a video of me and the poem filmed yesterday (apologies to Mr Dylan):
And here is a pic of all the illustrations together (on the floor, they haven't made it to a wall yet...):