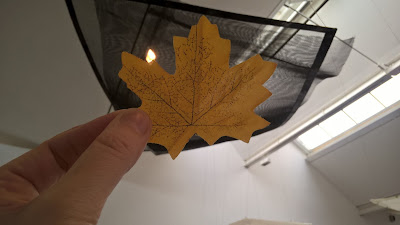 Messing about with art, Dundee

Last week I came second in a writing competition. It wasn't a huge affair (it was organised by the brilliant local theatre Dundee Rep as part of the promotion for their production of Deathtrap) but it was still nice to be able to say to myself 'maybe you aren't completely crap then'. The brief was to write a piece/story about writing (500 words max.) and it was my kind of competition in that you had to work quickly, you didn't have to pay to enter and they chose the winners pretty quickly too. You can see a photo of a few of us 'prize winners' here. My piece is more monologue than story and I will paste it below. It is fiction, for the most part. I'll be back in a couple of days to tell you how brilliant the film/documentary Unrest is (and if you haven't seen it, seek it out).

Someone on Twitter has won a prize. Well, that almost never happens.

Someone else on Twitter has won a prize. I’m thrilled for them both.

I eat a bag of Aldi crisps, switch to sweet (cooking chocolate), have a cup of tea.

I do some editing and while I’m doing it I notice links between some of the words in the piece that I’ve never noticed before. I think that maybe the words know what they are doing and this is a relief. Maybe they could just get an agent on their own and miss me out of the process altogether. Maybe that could be the plot of an independent film and I could write it. Or maybe that film already exists. It’s probably not my kind of thing.

I flick online to tread some time. Someone I once met at a festival has just been mentioned online by someone else who is quite famous. The someone I once met at a festival (a poet) might sell some books now so that is good for them and I am pleased. That someone was friendly and they work hard and deserve success. I think all this but I don’t really feel it. Only the dog knows the truth.

The dog looks at me with hungry eyes. Sometimes she wonders what is so special about the clicking machine but if I take her out for a walk she forgets about it soon enough. I take her out for a morning stretch and the great outdoors is full of inspiration and stories. I’m quite glad to get back home to be honest. It’s all a bit overwhelmingly real out there.
Someone on Instagram has also been outside. I see their photograph of the sunrise earlier today. It is amazing.

There is so much blah
gif, banter, gif
And the clock is getting ruder
tick, Tick, TICK

No, not that clock
Fuck that forever
Heaped pressures of the pack
That game is crap

Here's a poem, a new poem. It has a swear word in it for which I make no apology. I don't use swear words in poems very much but that is probably mostly due to the fact that I have been raising a child for the past 17 or so years and most of us use fewer swear words around children (and when you do that those words sort of drop out of your vocabulary for a while). But that child is very nearly 18... so the language is relaxing a little more every day. And sometimes a swear word is just the one you are looking for.

I have also been using more punctuation in poems in the past few years but I often find it infuriating so I was glad to ditch it (or take a holiday from it anyway) for this poem. I make no apology for that either.