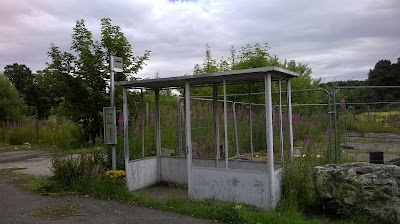 You get to a milestone;
You look around, take stock.
Maybe you sit down,
Have a drink of something,
Maybe with friends,
Maybe not.

You review the route so far,
What’s loved, learned, lost.
There is a soundtrack,
You recall some of it.
Maybe the greatest hits,
Maybe not.

So, I realise that since I've been writing poems again (and posting them here and elsewhere) that most of them have been fairly sad. This is with good reason (many sad things to see and feel around us...) but even so... it cannot always be this way. So the above is (I hope) at least not too much about death (though I think nearly all poems touch death somewhere... don't they?). I suppose this one started because a lot of people I know are turning 50 this year (my turn in a few months) so I am at that thinking-about-time-passing stage a lot of the time, it is unavoidable. Mostly I think we are just all lucky to still be here in whatever form we have arrived. Oh and people keep posting old music on facebook... and that kind of thing. So here you are - thoughts on pausing and the past and what-not. Happy Friday.

Photo is of abandoned bus stop up at the former Sunnyside hospital (photo taken end July this year). The site has been sold recently so I guess this bus stop's days are numbered.
Posted by Rachel Fox at 11:50 6 comments: 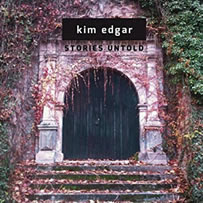 So, it's August, halfway through already, and here in Scotland that means the schools go back soon (very soon... tomorrow in fact). As usual I have done little-to-no writing over the summer (family business, lots to do, some of it involving doing as little as possible...) but as it happened I was more than happy to leave the poem in my last post as my statement for the summer, if you like. News moves so quickly but poetry doesn't have to. The death that prompted that poem (the murder of Jo Cox) still happened. It is still shocking.

Today I have something a little more cheerful to mention however. Another poem of mine (written quite a long time ago, 2006, on a postcard here) has made it into the world of music (well done, clever poem). In particular the poem 'Significant other deceased' (poem itself not cheerful, obviously, written after reading an article about victims of the London bombings in 2005) is now part of the marvellous thing that is track 4 on the album pictured above - 'Untold Stories' by the very lovely and talented Scottish songwriter and musician Kim Edgar. The album launch was this Saturday (just gone) in Edinburgh and you can now buy the album via Kim's website, even though official release is in September. The site also has info about Kim, all her gig dates and so on. It is a brilliant album (as are all her three solo albums) and I cannot recommend her work highly enough (which makes it all the more exciting to be a tiny part of the latest album). Other names that appear in the writing credits for 'Untold Stories' are Karine Polwart, Jürgen Treyz and Gudrun Walther but most of the writing is Kim's own (and the singing, and the piano playing... and a fair bit more besides... like the stunning cover photography). The launch was in Stockbridge Parish Church in Edinburgh and the stage just before Kim came on looked like this: 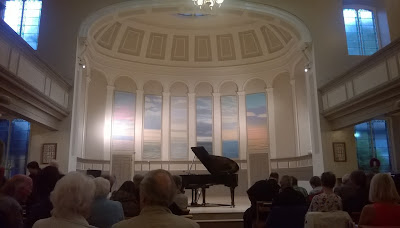 There was a full house, a warm, friendly audience to match the artist herself and some absolutely precious sounds and expressions of love and care and hope (and a raffle with allotment vegetables). I haven't had many big wow moments in my writing 'career' really (though I did get an encouraging word from Michael Marra after I read a poem at a gig he was headlining some years ago... I've lived off that for a while!) but this was a pretty special night (for everyone there but certainly for me). Happy sigh.