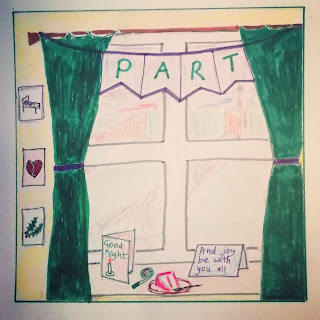 So I made it to the end of the Funaday Dundee month-long project. I posted 31 illustrations/images - one a day for all of January - and each one featured one main word with all 31 making a poem (a happy poem, a positive poem, even, possibly, an inspirational quote-type poem*). I don't write that kind of thing very often but it's good to flex all the muscles, right? You can see the full thing on my Instagram or Twitter and the image above is the one posted yesterday on the 31st January. I wrote the poem back in December and didn't for a minute think about the fact that I would be posting something about parting on the day the UK left the EU (no Brexit parties here!). I didn't even realise the possible connection until long after I had posted it! For me it feels like England, at least, left the EU a long time ago. Currently a lot that is bad about England (and indeed humankind) is getting a boost, feeling chuffed with itself, strutting around thinking it will always get things its own way. I haven't lived in England since 2002. I don't miss it.

I started the Funaday project with nothing but the poem (31 words, one for each day of January, and no word repeated) and beyond that I had absolutely no idea what I was going to do. I really enjoyed that aspect of the activity - the unknown, the unplanned, the surprise! As I found myself using a musical link to prompt the illustration for 'Start' on 1st January (see last post) I just continued with that for the rest of the month and it took me to all sorts of unexpected places (Mary Poppins on a skateboard on 19th January for 'proud', Rabbie Burns in a 1970s suit on the 20th for 'burn' - some help from the daughter to get to that mash-up!). As a non-artist (non visual artist anyway) I did a fair bit of googling ('how to draw a...', 'different kinds of Motown record labels and logos...') and each day I listened to the songs that I was referencing (as much as I could... I didn't really plan on using Bonnie Tyler but the desire to have an 'eye' picture was too great so in she went for 'turn' on the 17th!). Otherwise I was very happy to spend a lot of January in the company of many old acquaintances - Michael Marra, the Supremes & the Temptations, Inner City, Judy Garland, Van Morrison, Kate Bush, David Bowie, The Beatles, Gil Scott Heron, Nina Simone, Cara Dillon (her version of the traditional song 'The Parting Glass' being the main song I had in mind for the word 'part' on 31st January and therefore the image at the top of the post), Corinne Bailey Rae, Johnny Dickinson, En Vogue and others. I found lot of disco music making its way into the reference selections too (for a few years in the late 1970s disco music was most definitely one of my favourite things). And every now and then I found the radio giving me a reference that I didn't know I needed (Lauren Laverne played Queen's 'Play the Game' early in January on her 6 Music Breakfast Show and that was perfect for 'play' on 23rd January). You still hear a lot of Queen songs all over the place (I'd happily never hear 'We are the champions' again, likewise 'We will rock you') but you don't hear 'Play the Game' so much, in my experience, so in it went (at number 23 pop-pickers!). 23rd January is also my birthday so I spent a good part of it this year drawing a playing card with Freddie Mercury and Brian May's faces (or something vaguely like them) where the queens' should be. I didn't google to see if someone else had done this before (though I just have and you can buy shirts with Freddie as Queen of Hearts - I can't see anything with Brian, which is a shame as he suits the outfit). Some days I had more time to devote to the project than others (and this is reflected in the detail of the drawings at times!).

And now it's over (or sort of over). There is an exhibition (in a place/gallery space - not just online) for Funaday in Dundee in April** so I may well do something with all these images for that. A friend suggested they might work as a book of some kind... I also quite like the idea of putting them in transparent record sleeves and either them sticking them up on the wall like that and/or having them in a box of some kind so you can flick through them like you would in a record shop (some of my earliest happy memories involved listening to 7 inch singles, some of my own but many more bought by any one of my 5 older siblings). If I had planned in advance I might have made the original artworks the exact size of 7 inch singles to make this work better (in fact they are a little smaller than that at 15cm squared). But as I say, very little planning was involved. Spontaneous creativity, don't you know.

*The poem is below. I don't particularly have a title for it but I'll see what happens as I work with the images a little more. It echoes a lot of my regular themes I think (not that anyone else will necessarily notice). For instance I can feel a link back to a fairly old poem of mine called 'Just the one song' (it's in my 2007 'More about the song', though I can't see it online). We need to share a bit more than we do (space, time, stuff, responsibility...). It is hard (but then so is trying to draw Freddie Mercury on a playing card when you're not an artist!) but that doesn't mean we shouldn't keep trying. As it says in the film 'Jojo Rabbit' (which I loved!), we should do what we can.

Thanks for reading and I hope you enjoy the images. May 2020 have more fun and less fascism.

** Obviously this exhibition has been postponed for now.
Posted by Rachel Fox at 15:39 2 comments: