In which I have written a poem about 'Desert Island Discs'... 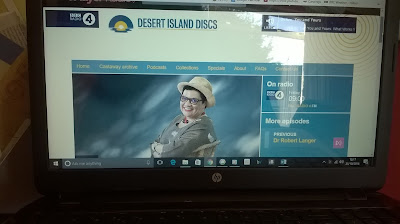 There are so many islands,
Crammed into small spaces.
Which are you, my friend?
Do you know, can you say?

On our sofas, or chairs,
Our beds, or whatever,
We need signs of life
And lights from afar.

We need warm voices,
Tales of survival.
Without them we harden.
Set. Crack.

We turn to the sound
Of our desert’s guide.
Her voice has a glow.
How can that be?

She hangs with the great,
The funny, the strange.
She asks them questions,
What’s more gets answers.

We can sing along too,
Down but not drowned,
A little more encouraged,
A lot less lost.

Why this week alone,
I had brunch with Barry Manilow,
Cooked crumble with Jackie Kay,
It’s a world away.

I started this poem a couple of weeks ago but it wouldn't come out right... today it seems to have found its shape (or a shape anyway...). For those of you beyond our shores it is about listening to the BBC radio programme 'Desert Island Discs' - currently enjoying a golden age with its best ever presenter, Scots marvel Kirsty Young. She gets the tone just right, I think, and gets great interviews as a result. All episodes of the show (with Young and all the previous presenters) are available on the website in the castaway archive section. Whatever you think of the BBC in general (and it certainly has its critics up here in Scotland these days) this bank of shows is still an amazing resource.
Posted by Rachel Fox at 12:39 3 comments: 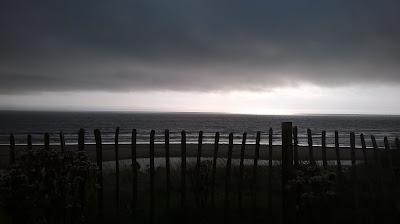 We're in a car,
It's daylight,
But nothing like morning.

Is someone driving?
They must be,
How else would we be moving?

The streets are almost empty
And we are somewhere lonely,
In London, England,
It seems kind of unlikely.

Somebody says something
About us being in the east
And there still being miles and miles to go.

The car rolls on and on and on.
When we get where we're going
We drink tea, call it home.

The photo is not connected to the poem (photo is a Montrose morning, September 2016). The poem is an old one... I find that as I review poems past some grow on me with age and this is one of those. It might make it into the small pamphlet type thing I am considering getting together as a 50th birthday present to myself (that's only half a joke). The nightclub years are quite a distant memory now and mostly that memory is pretty vague and blurred but this night and its sensation has stayed with me, largely because of the poem I suppose. Maybe we should write all our memories into poems and then we won't forget anything. Only (half) joking.

Anyway, I did a lot of staying up far too late in the 1980s and '90s but one of the definite pluses was the whole 'being around when hardly anyone else is' business. For me you can't beat an empty city (unless it's a real war zone of course...) and I guess that's why so many of us love the zombie apocalypse fantasy genre so much. But I've had a cold this week... and I'm rambling...
Posted by Rachel Fox at 12:24 2 comments: