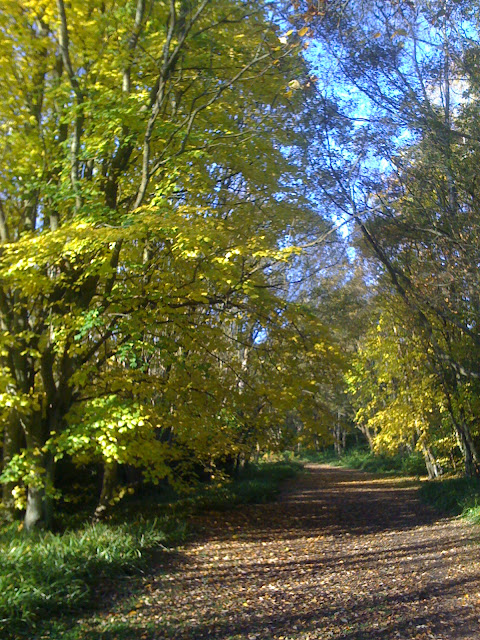 Getting on with this and that last week I was shocked and upset to see a headline on a local paper in our corner shop that shouted out just three words: "Michael Marra dies". Some of you may not know Marra - he was a very local hero in some ways (born in Dundee, died in Dundee) - but he was an absolutely brilliant singer, songwriter, musician and entertainer. I have written about him on blogs before and even once wrote a poem celebrating his genius (that's here). I saw him perform live 3 or 4 times (even got to introduce him at a benefit gig in Dundee once) and he was really a cut above most performers (and songwriters). He was only 60 when he died and there are a host of tributes in online newspapers (a good one in Dundee's Courier here, for example). He had so many good and varied songs that it's hard to know which one to pick to post here but this video gives you a taste of what his live shows were like (some of you outside Scotland may not get all the vocabulary but I'm sure you'll get the drift...).


Good-bye Michael Marra and thanks for sharing your talent with the rest of us. We really appreciated it.
Posted by Rachel Fox at 11:03 4 comments:

Winding up the time away 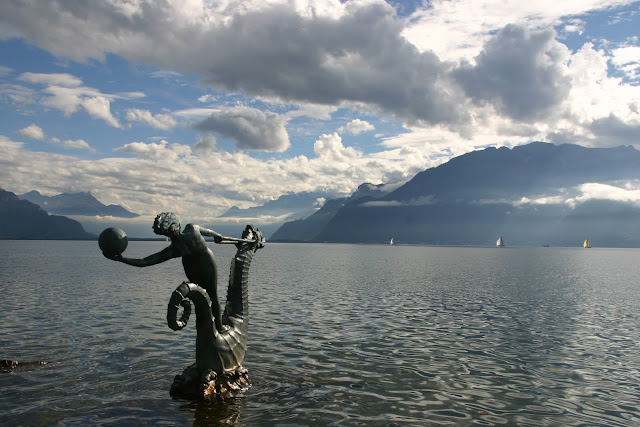 So on 9th October we drove into Switzerland and Geneva via small roads and a very quiet border crossing. We had arranged to stay one night in the city of Geneva (it is VERY expensive in Geneva.. and indeed in most of Switzerland... so one night was the limit). Rain was forecast but in fact the sun shone and the day was lovely so we managed to walk around and see things like the famous jet d'eau... well, I say famous... I'd never heard of it before I read about it in the guidebook. It looks a bit like this: 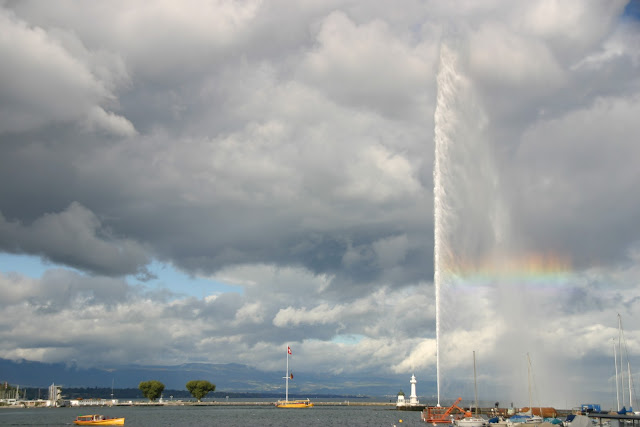 Geneva is one of those cities that looks amazing in all directions with the mountains, lakeside and striking buildings. It is a business city for the most part and so it does feel a bit heartless somehow (says us after being there for all of 24 hours...) but still I liked it. How can you go wrong with all that water really? We had the cheapest dinner we could find on northside of the river Rhône and then took one of those little yellow taxi boats/mouettes you can see on the photo above back to our place on the other side. It was dark, the ride was free (hotels hand out free travel passes) and the boat's "captain" was a very laid-back individual. It was fun - h loved it!

Next day we wandered more around the old part of Geneva, then called in to see the UN Office on our way out of town. It has a big broken chair sculpture outside that looks like this (info on the sculpture here): 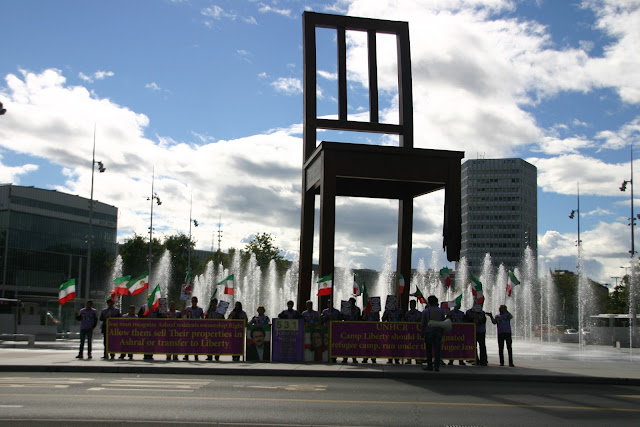 Then we drove on to Nyon on the lake and took a short boat trip over the water (to Yvoire in France, as it happens). Really we just wanted to be on the water... well, I did... I love being on water. One of my favourite photos from this holiday set is this shot of a swan that Mark snapped as we approached Yvoire (there are a lot of swans on Lake Geneva). Why do I like the picture? I suppose I am very childish... 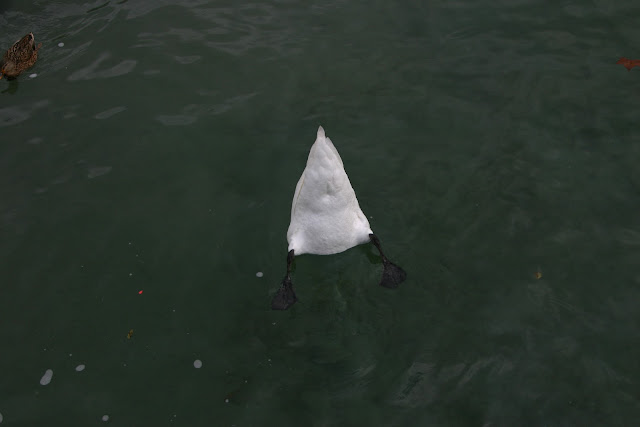 After the boat trip we stayed a night just over the border from Nyon in Divonne-les-Bains (cheaper) and then headed back into Switzerland to Lausanne for most of the next day. First we went to the Collection de l'Art Brut (usually translated as Outsider Art) and I think we were all pretty blown away by some of the work in the gallery there. I have been interested in the subject on and off for a while but this visit gave me some new nudges in artistic directions I think. After that we called in to the Musée de l'Elysée (Lausanne's photography museum) because we're also interested in photography and they had an exhibition on show just then which featured some very famous American works such as Dorothea Lange's "Migrant Mother"(the whole set is called the Howard Greenberg Collection). Probably the photo that struck me the most from the collection was this one called "Butterfly Boy" (1949) by Jerome Liebling: 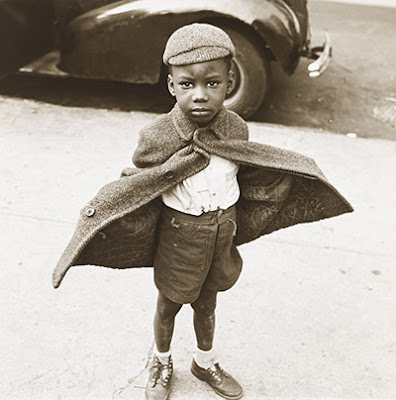 We ate a picnic in the grounds of the museum overlooking the lake and then drove further east to Vevey. Vevey is about as pretty as a town can ever be - lake, charming buildings... no wonder people like Charlie Chaplin chose to live (and die) there (o.k., they have the Nestlé HQ too but you can't have everything). The sun shone for us again (we were lucky... just a couple of days rain all holiday) and we made friends with the seahorse sculptures down at the lakeside. One is at the top of the post and the other is here: 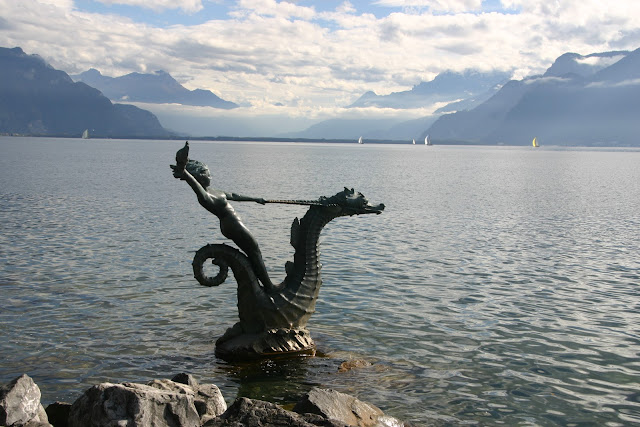 Near Vevey we stayed with a childhood friend of mine and her family for a couple of nights. Whilst there we also went a little further north to Gruyère to see where cheese and chocolate are made (all good, all tasty) and then on the 13th October we drove the other way round the lake, back into France, through Evian and back to Lyon to leave the car and (gulp) fly home (I did it.. not easily... but I did it).

I'll leave you with the Lake Geneva photo that seems to be winning in the facebook "likes" category so far (also taken at Vevey). Like many of the striking pics on here Mark took it.. but then he knows a good thing when he sees it... (hah!): 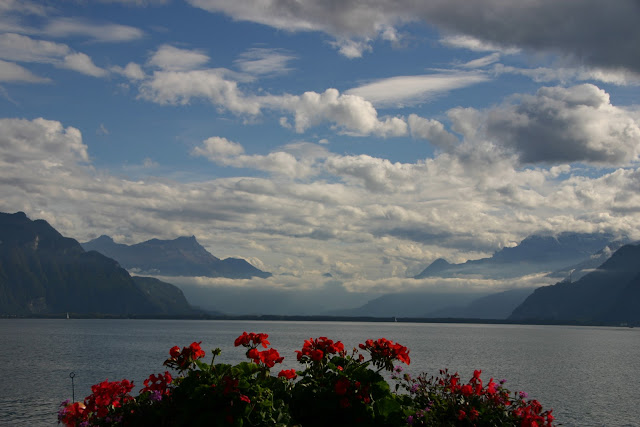 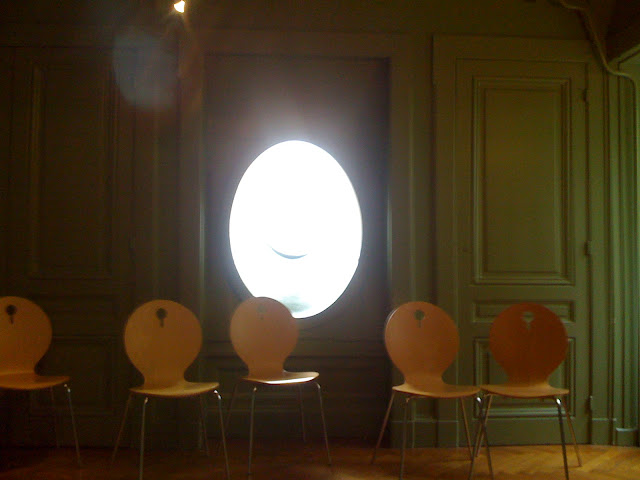 So after Paris we took one of those speedy double-decker trains down to Lyon. Why Lyon? Partly just because it's a part of France we've never been to before. We arrived in Lyon on the Saturday afternoon (6th October) and it was hotter than a Scottish summer's day and busy and really very lovely as cities go. We walked, saw the new town, the quite old town and then very old town. Then we got the funicular up the hill to see the views out over them all... and then we went back down again to eat a very nice meal indeed (guidebook said the food in Lyon is some of the best in France - quite some statement - and it seems the book was right). Young one had such a nice chocolate dessert that she went quite giddy... 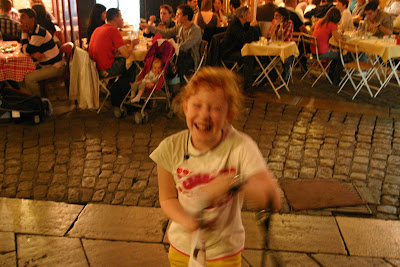 whilst Mark pronounced the white wine I'd ordered (some Mâcon) the "best he'd ever tasted" (we were, fairly evidently, high on life... or wine and chocolate anyway). For me it was just nice to be outside and not fighting off pigeons (as in Paris). I do not like to eat with pigeons round my ankles!

Anyway on the Sunday we made our way to the Institut Lumière for it was here, in Lyon, that the whole business of cinema/film really started (and remember we have young film fan on board). The Institut, as you might expect, is not the most kid friendly tourist attraction in the world but she still enjoyed it (all worship the audioguide!) and we did too (it was quite laid-back, old-school...). The photo at the top is just one of the rooms in the museum... there was a film showing... there was no-one else in there... I liked the shapes.

After this we took the bright and shiny Lyon metro back into town: 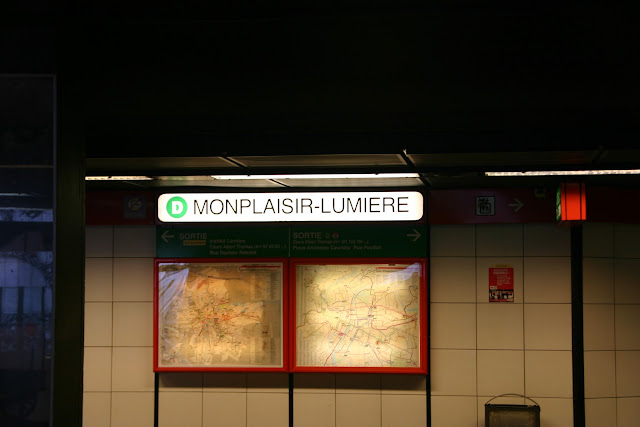 And then on the Monday we picked up a hire car and headed, quite literally, for the hills. First Chambéry (lunch break - nice fountain full of elephants) and then Annecy (to see the lake, to eat more...). Annecy, for most visitors, is picture-postcard-pretty: 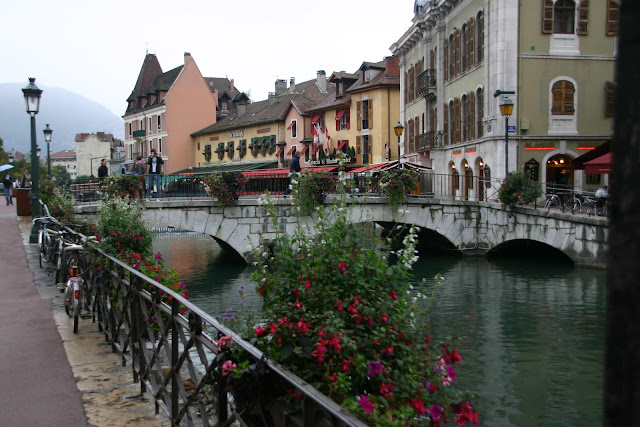 and judging by all the restaurants it must be HEAVING in the summer months. We stayed in a place just on the edge of the town (quiet, up in the hills really) and then the next day headed for Switzerland. But that will be next post.
Posted by Rachel Fox at 10:51 11 comments: 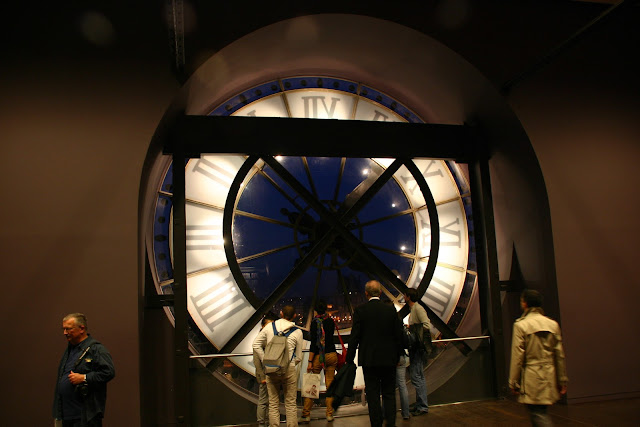 So, we went on holiday (Angus schools get first two weeks of October off, remember?). Full photos are going up on facebook for those who are interested but for the rest of you there will be a quick round-up in a few little posts.

We left home on 2nd October and took the train down to London (family railcard cheapo travel) and then the Eurostar to Paris. It was my first ever time in the Channel Tunnel (and it's been open for 18 years!) and I only needed one small beer from the bar to take my ever-anxious mind off the slight strangeness of being in an underwater train for over 20 miles. Daughter (now 12 but still delightfully wide-eyed) was surprised (and no doubt a little disappointed) not to be able to see the water of the Channel while we were in there. Mark did the technical explanations (but she probably didn't listen... we are not very interested in real things still...). For those of us who grew up taking slow trains and ferries and then more slow trains to get to the city of love it does make the whole business very easy! Arriving quite late in Paris we took a beautiful cab ride to kind cousin's place over near the big famous tower, drank some wine and then collapsed into beds.

Day one of serious tourist activity included a trip up the big famous tower for the braver members of the party (i.e. not me!) and then a walk over towards the Arc de Triomphe and along the Champs-Élysées before a cup of very fancy tea and then a trip to the late-night opening Louvre. It was a cloudy day with some rain but full of highlights just the same. The Louvre was looking fantastic - there's a lot to be said for a late-night opening...

Day two dawned sunnier and shinier and included a special exhibition at the Hôtel de Ville called "Paris - vu par Hollywood". Daughter being such a movie fan we had to go (plus it was free). Posters looked like this: 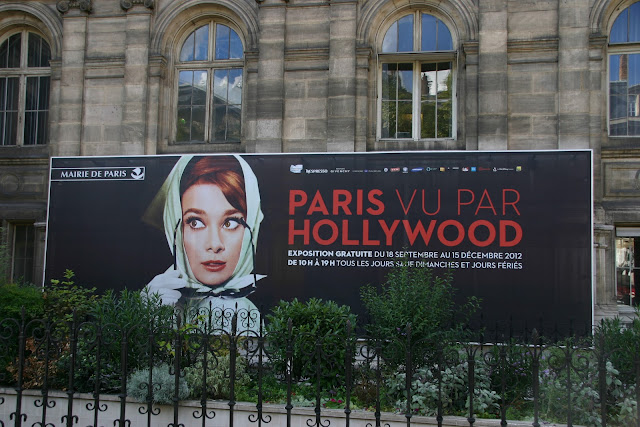 Then it was a quick nip by the Centre Pompidou, a wander over (and into) Notre-Dame Cathedral, a nosey into Shakespeare and Company bookshop, a coffee break and then another late-night museum trip (this time Musée d'Orsay - and it was just fabulous... photo at the top of this post taken on the top floor there). The Van Gogh room just about took my breath away... certainly made my eyes open that bit wider.

Day three (another sunny one) we took a bus up to Montmartre, partly because I'd never been there before. 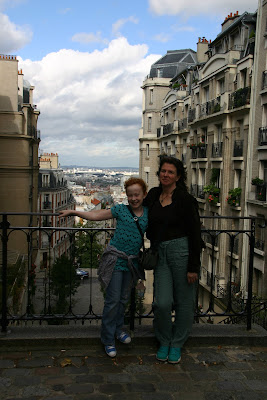 There were gorgeous views and gorgeous food aplenty, a moody cemetery and, of course, a rather tired looking Moulin Rouge down amongst the sex shops and fancy-seeing-some-breasts-and-bums bars. After that it was bus back to our base, more food and then a walk out by the river and the tower (and they'd switched the twinkling fairy lights on it  by then - very pretty and they can be seen on tiny video here).


Day four we got up and took the train to somewhere further south... but more of that next time.
Posted by Rachel Fox at 12:47 15 comments: