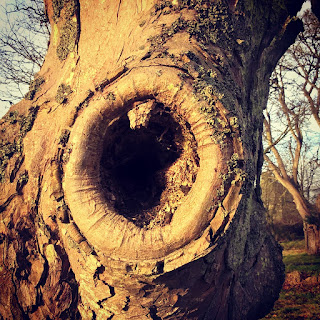 Here we go again,
Let us please lock keys,
Let us curtly tell each other
To get back down on our knees.

Let us bark out orders,
That seems totally fine:
Wear this, eat this, write this, suck this,
There is one way, and it’s mine.

Don’t make us all look bad
With your artless whine,
Only some of us are winners,
Did you miss my special sign?

Don’t be spitting here,
Or playing children’s games,
There’s one pretty road to heaven
And one tidy list of names.

Messy people, silly scribbles,
Turn the stomach green.
This is how we do it –
Keep the front step clean.

or if you'd rather listen than read off the page try this:

I'm not a big one for literary criticism (shocker, I know), partly because when I read some of it it makes me feel like I need to have a long hot bath to get clean again. I particularly dislike writers being lumped together into groups to make a weak point (as happened in a recent article that you may or may not be aware of and, if not, be glad!).

Instead listen to this week's edition of 'Poetry Please' , co-hosted by Hollie McNish. It features a particularly powerful poem called 'An Abortion' by the illustrious Liz Lochhead (who was mentioned in last week's post on the Marra book) and 'April Sunshine' by Scotland's fabulous current Makar, Jackie Kay.
Posted by Rachel Fox at 16:37 2 comments: 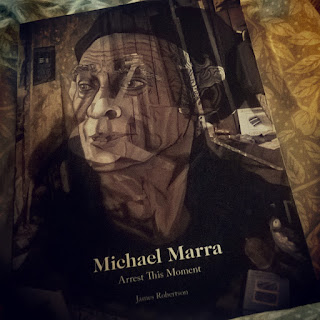 Since Boxing Day I have been reading one of my Xmas presents – ‘Michael Marra - Arrest This Moment’ by James Robertson (Big Sky, 2017). As a huge fan of the Dundee* songwriter (and singer, musician, artist and actor) I knew I would love this book and I wasn’t mistaken. In fact I purposefully didn’t get it when it came out in October but waited to receive it as a Xmas present. I wanted it to feel special, to look forward to it, and these feelings are less and less common, I think. So often now we want something and we just get it, right then and there, ‘order today to arrive by 9am tomorrow’, but Marra’s work was so brilliant that I didn’t want to rush reading this book about him. It arrived slowly and I read it slowly. I cried quite a bit (Marra died in 2012 – a fairly early death by today’s standards) but there was much joy too, especially in returning to his music with cleaned-out ears and a lighter head. James Robertson is a successful Scottish novelist but for this task, most importantly, he was also a friend and neighbour to Marra and so ‘Arrest’ feels serious but also personal and that is just as it should be. Marra was a huge talent but he chose to stay close to his roots, to write in the language he grew up in, to work with the people who meant something to him (you can learn all the details of this in ‘Arrest’, his move to London, his return and so much more). The book took me about a month to read but I may just read it all over again in February. I guess I am a fan (but I knew that already). Pretty much everyone who saw him perform or heard his music, or even just met him, was a Michael Marra fan of some kind. For me he was a voice of reason, a voice that joined depth and humour in just the right places, a voice I could listen to all day. And I loved his piano playing too.

It’s interesting to be writing this today because tomorrow is the day, here and elsewhere, when one of Scotland’s other famous writing laddies gets his annual celebrations. Both Burns and Marra were experts with words and lived for the tunes and one of Marra’s most well-known performances, perhaps, is his version of Burns’ ‘Green Grow the Rashes’ (I just caught it again as part of a Liz Lochhead feature/interview on Radio Scotland). It’s an immaculate version and, much as I like and admire Lochhead, I always find it difficult not to envy the long working relationship she had with Marra (though I work hard to send that envy on its way because it is a silly reaction and no good to anyone!). The best foil for a poet is often a really great musician of some kind and Lochhead and Marra struck gold with each other I think. I never saw one of their joint performances (though I saw Marra live 3 or 4 times on his own) but Lochhead is one of the many people who is interviewed about Michael Marra in ‘Arrest This Moment’. He was loved, admired and respected by most, if not all, of the writers and musicians who have become huge favourites in this house since we moved to Scotland (Rab Noakes and Karine Polwart, for example) and many of them feature in this unashamed tribute of a book. Marra's name may not be that well-known outside Scotland but this is everyone else’s loss – he was, for me undoubtedly, a mostly 20th century great along the lines of David Bowie and Nina Simone (in Marra’s case, he was a great songwriter, a great performer, a trailblazer, an artist, a collaborator and an unforgettable and unique singer). We don’t need to decide who was the greatest of the greats I don’t think – we can just be glad we had them all in our lives (and ignore any that weren’t personal favourites, there’s no need to fight about it – god knows, we fight about enough already).

I didn’t know Marra personally at all (and that's probably why I refer to him as Marra and not Michael). We exchanged a few words once in Dundee, in 2009, when I was lucky enough to be on the same bill at a benefit night, but in ‘Arrest’, and the words of those who knew him well, he is very much Michael. Unlike so many heroes (and I am aware he wasn’t someone who wanted to be a hero necessarily but I’m afraid that ship has sailed…) it seems clear that Marra was a good man too (brother, husband, father, friend). As someone who hardly knew their father, I enjoyed some of the details about his relationship with his children but I'd be lying if I didn't admit they prompted a good share of tears as well (this time it wasn't envy that needed chasing away but some old sadness and longing that's mostly dealt with, I promise…). What a father to have had (and both children, Matthew and Alice, are now musicians and involved in music in all kinds of ways). Alice Marra put out an album of her father’s songs last year (‘Chain up the Swings’). They are carrying on the best work in the best ways.

To finish I should say that I am aware this is not a book review (I am not a huge fan of many book reviews anyway so I don’t really mind). I did write reviews regularly years ago (of books and other things) but the whole business of bashing through a book at 100mph so you can then rave or bash (or a combination of the two…) – it wasn’t really for me. These days I just write about a book when it moves me (and this one definitely did that). But it was songs that were Michael Marra’s bread, butter and jam so I think I need to end this with one of those. I don’t have a favourite of his songs (so many excellent ones) but as Dundee is much on my mind just now (we’re hoping to move that way this year… ) I’ll choose this one (MM is minus the trademark beret but the sound is good on this video). And I would suggest you all share some Michael Marra with someone some time soon – it's never a mistake.

*I always thought Marra was known as the Bard of Lochee (the part of Dundee where he lived as a child) but I have also seen him referred to as the Bard of Dundee... anyone know anything about this (which came first, which is most common, whether he hated the very notion...)? Thanks.

p.s. I have written about Marra on this and my previous blog many times… my little poetic tribute to him from 2008, for example, is here (and local songwriter Gary Anderson’s version of that poem in a song is here).

p.p.s. I got a bit excited writing this piece (haven't written much over Xmas etc.) and so left lots out that I should have mentioned. For example, I had somehow never heard about Marra's song about footballer Gil Heron (Gil Scott Heron's father). I'm not sure how I managed to avoid knowing about that as I am a huge GSH fan too (evidence in poem form here)? Anyway, in the 'football' chapter there are details about this song and about Gerry Hassan taking a demo of it to GSH in New York. Gerry Hassan has a good piece reviewing 'Arrest This Moment' at his blog here.
Posted by Rachel Fox at 11:18 2 comments: