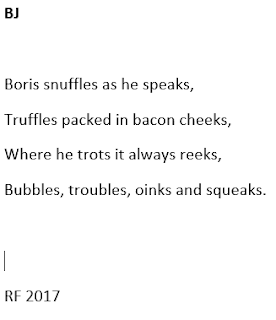 So, I've been writing lots of little poems again lately. I used to write them years ago but haven't come up with any for a while. The current output started a couple of posts ago after our general election and it hasn't stopped since. I wrote a 4 line poem about the local result in the election and then one about Grenfell Tower, then Nigel Farage, Boris Johnson, the Queen, Theresa May, the Daily Mail... I just don't seem able to stop! Because they are all so short I thought maybe they might be suited for Twitter. I've just never fancied using it myself up till now but I thought I'd give it a go for this. You can find my bit of Twitter here. It's an experiment really and I am learning all the time. Today I learned that I should move the cursor before I snip the text (see above Boris Johnson poem). For those of you elsewhere he is sort of a politician, sort of a very bad, unfunny joke. It doesn't need to just be my poems either - I will tweet/retweet other people's 4 line poems too... if I like them. Have a go... if you're not on Twitter you can put them in a comment on here or on facebook or whatever. They don't have to rhyme (I even wrote one about that... it's on the profile).

Anyway, I don't know how long these little poems will continue but for now I'm over there a bit... over with the non-stop, 24 hour news people.
Posted by Rachel Fox at 00:10 7 comments: 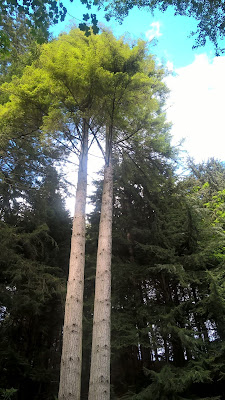 Near Dunkeld, earlier this month

Governments can be terrorists too,
Save some pennies, all for the few.
What would Margaret Thatcher do?
Burn the poor for a better view.

I posted this little poem on facebook yesterday so some of you have seen it already but I post it here just to keep a record really (the blog is a little more permanent than facebook, though it gets less comments). I seem to be in a stream of these little reaction-rhymes just now (as opposed to reactionary rhymes...). I haven't written poems like this for a good few years but the times and events dictate the form sometimes... in fact maybe they always do (for me anyway). I have subtler work but subtle isn't everything. I had pretty much stopped writing rhyming poems (though not intentionally) but a couple have appeared in recent weeks. Maybe it was the Tony Walsh interview the other week that prompted this where he said, of poetry, “It’s ancient and it’s in us. I teach what I do, and in some ways I don’t so much teach it as allow people to find it in themselves. Particularly with rhyme, there’s a reason it’s been around for thousands of years. We live through rhythms and heartbeats. I think we’re hardwired to receive rhyme. When you get that balance between meaning and rhyme and flow, there’s a music to it which we respond to instinctively." Though of course, like anything, you can have too much of a good thing...

Anyway, this wee poem, obviously, came from reading, watching and listening to a lot of the coverage of, and reactions to, the Grenfell Tower disaster this week in London. I followed reports of the demonstrations yesterday too, pleased that people were speaking out but worried that there might be more deaths if the authorities dealt with the protests badly. Some of the UK media coverage is stupid but we expect that now. I hope the next generations find media that work better for them, that are more independent and much less keen on making us hate victims or the vulnerable. Writing so soon about the person whose flat (allegedly) was the source of the fire, for example, was premature and cruel (I think that was in The Daily Mail). I know the 'more in common' campaign (in Jo Cox's memory) is trying to improve media coverage in general (they got The Sun and others to print a 'more in common' editorial this week) but do we really believe such papers want to change? What would a positive, caring Sun newspaper even look like? Some of them have made their beds badly so many times that the dirt is never coming out of those sheets. Go and take a look at the front pages in the shops today and decide for yourself. I believe The Telegraph went for the old favourite ('militants hijack inferno protest') but maybe there were complaints as I can't see it on their website now. I went on quite a lot of London demonstrations when I was younger (and living down south... and Mrs Thatcher ruled the roost) and pretty much every time there was a march that was the story the press wheeled out (how they loved to feature 'militants vs. the police' stand-offs, how I hated being stuck in those closed-off streets...I'm quite claustrophobic...). And yes, there were people from far-left parties present on most of those demonstrations but they were usually a tiny minority and focusing on them was an easy way of avoiding the issue the demonstration was about (in those years the Public Order Act, Section 28, to name just the first two that come to mind).

Also this weekend there are many events planned for a Great Get Together to commemorate Jo Cox's death (one year ago yesterday). I watched the documentary on this week ('Death of an MP') and was so impressed by her life story, the energy she had, the love so many felt for her and, as most of you know, I wrote a poem last year prompted by her death. MPs can be good people, journalists can be good people, police officers (and 'militants'!) can be good people. We have to hold on to that and help those people stave off more austerity, more prejudice, more unnecessary deaths. I know this is all obvious. Isn't it? 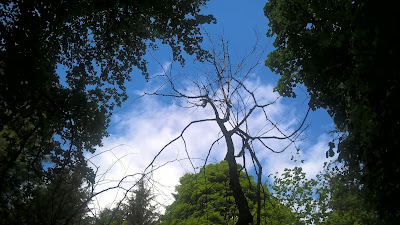 So, we had our election. Of the two largest UK parties, the party that didn't win was celebrating and the party that (kind of) did was... not so much (at least not in public... too busy doing the deals and handing out blame). That party (the Conservatives) always seem to win somehow though... even when it doesn't say that on the list of results. They move sideways a bit, they hide from view a little, they change their colours, they play a bit of golf. Here in our local constituency of Angus the winning colour changed from yellow (SNP/Scottish National Party) to blue (Conservative) and many of us here felt very blue (in the other sense) about that. I am not a party member (I have never joined a political party) but ours was a good MP and it's a shame he got washed away (this time) by the Conservatives in Scotland and their fairly one-message (anti-independence) campaign. It may not be the only issue here but undeniably one of the big issues in Scotland is still Scottish independence (whether some people like it or not... it hasn't just magically gone away). Some people still feel very strongly 'aye' and the opposing side (whatever their party) are digging in their heels deeper than ever. Some people think this election will see independence hopes put away for another generation but others most definitely do not so nothing has really changed in that regard. Other people's opinions are hard work!

I wrote a little poem on election result day. Some of you have seen it on facebook already (my most shared poem ever I think...). As I said on there I haven't lived in a Conservative constituency since 1989 and I'm sad that my adopted county went this way, this time. I love the colour blue and I always feel a bit sorry for it being associated, as it is, with this particular party. Also when I said "Blue window/To another day" on the back cover of my new book this was not what I meant!

Blue is the colour of my county's wallet,
The ribbon is too and the sky is grey,
The clouds hang low like a broken bonnet,
Sad is the song for our bairns today. 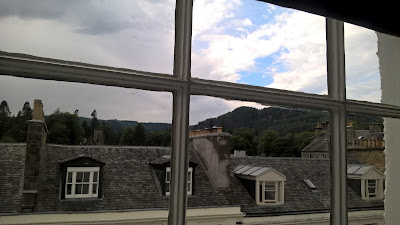 No poem today. Marvellous man and I were away for the weekend – marking 20 years together. We went inland to Dunkeld in Perthshire (view above is from our hotel room). We had a lovely time – food, drink, nature, music, peace – and I must be getting old (I am) because sometimes I feel like I would happily never leave Scotland again. We were only an hour from home but the scenery and atmosphere were completely different. There are many different Scotlands and they are pretty much all brilliant in one way or another. And 20 years... who would have thought he would be able to bear me for this long! It's amazing.

But there is a UK general election on Thursday so this is not going to be a quiet week. First there was the concert in Manchester last night... not my kind of music for the most part but the spirit on show was impressive. I listened with admiration as people in the TV studio talked about not being afraid and keeping on coming out to show defiance etc. (I admire this, in part, because I am one of those people who is fairly anxious wherever I am and whatever I'm doing...). It's worth reading this great interview with the Manchester poet Tony Walsh who was such a powerful voice with his poem 'This is the Place' after the attack on 22 May. I love what he says about poetry in the interview –  really worth a look. I think I was myspace friends with him about 10 years ago... that feels like a lifetime ago already.


And then London on Saturday night... again much horror followed by much defiance and 'we will not be scared' reactions. I know these reactions are important and I understand the point of them but they make me a little uncomfortable (this might be just my own weirdness...). And then this morning I read this piece about a Canadian who died in London on Saturday night and how her fiancé watched her die in his arms. "He is broken into a million pieces," said his sister. So this is a couple who won't make it to their 20 years together... not the first, not the last (of course!), not in the UK, not anywhere... but it is still sad and maybe I'm just a maudlin person but it's the sad that follows me about more than the defiant (well, at the moment anyway). I go and listen to the lovely mournful tune/song that Kim Edgar wrote for an old poem of mine about another London sadness (listen here). It's a beautiful set of sounds and I think how I admire that too (the ability to make beautiful sounds).