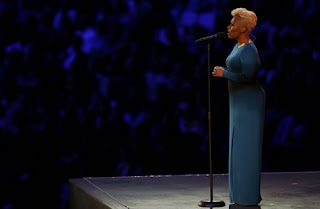 One of the ceremony highlights - Emeli Sandé


So, I was expecting to be full of smart alec things to say about Friday night's Olympic Opening Ceremony but in all honesty I really enjoyed almost all of it. Sure, there is a lot you could say about the money spent on it, about the carbon footprint business, about the real state of some of the NHS... but once a country/city has decided to stage the Olympics then something has to be done in terms of ceremony, I suppose, and if something's going to be done then what we saw on Friday night was, for me, as good as it could be (and in some places better). All 3 of us watched it from start to finish (I even watched some of the build-up and enjoyed little features like this one about 2000 medal-winner Denise Lewis).

Of the ceremony I enjoyed:

the enthusiasm of all the volunteers,
the dancing,
the kids in choirs,
the whole young people/social media/pop music section,
the subject of history being raised at all,
the dramatic rising factories,
the NHS/kids books section,
the athletes' parade,
the burning rings,
the fireworks,
Dizzee Rascal,
the Arctic Monkeys,
J.K.Rowling looking a bit terrified (millionaires can be nervous too...),
the Queen looking like she'd really rather be somewhere else (rather than that peach horror of a frock she should really have been wearing a t-shirt that said "too old to give a toss"),
the James Bond bit,
the ridiculous Beckham in the boat bit,
the Olympic flag-bearers (see here)
and possibly most of all Emeli Sandé singing beautifully (she's Scottish you know - at least one Scottish newspaper had her, cyclist Chris Hoy and JKR on the cover on Saturday...). Apparently US viewers didn't even get to see this part of the ceremony (NBC cut to a sports interview instead) which is a shame as she had such poise, such control - it was really spellbinding. It took a while to find the live performance online but here is a studio version of her doing the song she sang on the night "Abide with me" (words: Henry Francis Lyte, tune:William Henry Monk):

And then... it turned up eventually... here is the segment of the ceremony that features the song:

I was a bit bemused by:

Kenneth Branagh's role and why he had to stride around so much. He was being Brunel, apparently, and not some of the other suggestions, but I'm afraid Brunel has been ruined for me forever because Jeremy "spit on floor" Clarkson picked him as his Great Briton on that TV show back in 2002. In fact another reason I enjoyed the Opening Ceremony was knowing how much people like Clarkson would be hating it. "The NHS! The NHS! Something to be proud of! Agh!!" Maybe it even brought on a few early heart attacks in folks of the little-and-for-whites-only-England persuasion. We can dream. (Oh, I'm only joking... a bit... plus some of them are near relatives so I'm allowed... ).

I was surprised by:

The Mr Bean section (and the Bond sections... I didn't know humour, even gentle humour, was allowed in international ceremonies... what a relief!). I really was expecting the serious classical music to continue after Rattle's entrance and I was surprised and did laugh when it changed tack. I'm not a big fan of Bean or anything but the segment was quite Eric Morecambe in its way (the international language of raised eyebrows and all that) and that can't be bad. Kids will have enjoyed it too - ours managed to stay awake right till the end... so the show was doing something right in terms of reaching a wide age range (apart from her Maj, obviously).

I was not as impressed as everyone else by:

the cauldron thing... it looked like they were all carrying bedpans or something (another NHS reference?). I quite enjoyed watching the designer, Thomas Heatherwick (great name), talk about it on BBC news the next day though (some of that is here). I always love it when not-particularly-media-friendly people get on TV (slick media folk are just so last century...). He talks like a person who hasn't been trained to talk.

and I was totally disapppointed by:

the last item of the night being a ropey version of "Hey Jude" by (yawn) Paul McCartney (I don't use "sir"s - don't believe in 'em). I like McCartney (I love the Beatles... I loved Wings... I even have some of his solo albums... even the one from the HMMcM period) but he is past-his-best and that song has been wheeled out once too often (because people sing along in a feelgood manner...). It was a terrible letdown at the end of pretty great show which was a shame (though if we don't win a medal soon it won't be the only one...).

Reviews of the Opening Ceremony on the whole seem to have been very positive. Partly there was relief, I think, that it had not shamed us internationally (no firework malfunction, no collapsed cauldron...). There was griping online from both political extremes of course but that's to be expected (too many brown faces and loud bass lines for the far right, too much papering over problems for the lefties...). As a bit of leftie myself, I'd have to acknowledge that Country GB is a place where all is not exactly well in many ways... and yet... as a giant defence of the NHS on a world stage.. as a giant declaration of who we are... then and now... it really wasn't bad at all.

So, our not doing very much summer continues... there is that strange feeling of everyone else dashing off places and us just carrying on as normal (though I'm aware, of course, that it just feels that way and that not everyone can possibly be dashing off places...). Plus at least one person has said out loud what I guess a few more will be thinking "well, you did have 6 months away last year...". Yeh, I know. But it already feels like a lifetime ago. And I'm a spoilt baby and I want to go again.

But that's not happening... not right now anyway. Instead we had a day in Aberdeen on Friday (woo-hoo school uniform shopping...). Mark saw the new Batman ("good not great and needs some editing") and I have to report that he admitted that he did nod off briefly at the beginning (the test for all films - can Mark stay awake for the whole thing?). And let's just not mention the horrible business that will be associated with that movie forever. Back in Aberdeen, daughter chose "The Lorax" so I saw that with her (shorter, slightly less hype... though only slightly). I found it a bit "here we go... another cartoon telling us how to live but at the same time doing and representing the exact opposite in every way" (see "Happy Feet"... or maybe don't...) and in general I'd probably agree with the New York Times' verdict. Daughter enjoyed it but she loves pretty much all movies (as long as they're not scary) and it was enjoyable in a very temporary way... just not something I felt particularly good about on the way home. We bought the original Dr Seuss book on the same day (I'd never read it) and I read it to her when we got home. It beats the movie by some large distance (disappointed but not surprised, dear readers). And we're still waiting for the release of "Brave"...

Other things I've been looking at:

This article about loneliness in the Grauniad. I mention it partly because it's just well-written (and how often can you say that about newspaper articles... really?). She makes some good points too about our current way of living. I don't think I could call myself lonely just now but I know I have reached the odd point where a lot of my closest friends live huge distances away and that only now (in my mid 40s...) is that starting to bother me. And even worse, one of those friends, I now realise, died in 2010 (i.e. my Mum). How stupid am I? I never knew how much I would miss her.

The book "Wildwood" by Roger Deakin (left here by a friend... the book, that is). I started reading it this week. Don't tell me how it ends...

The sit-com "The Middle"... very much our family favourite just now. Mark is Mike, daughter is part Sue, part Brick, part herself... and I'm a little worried that I might be Axl (teenage son... lazy, stupid, vain...).

The movie "Moneyball". I got it for Mark to watch (man=sports) but in fact I really enjoyed it. Maybe it was all the knackered old baseball players getting their shot at glory... I don't think it was just the Pitt factor (though I did laugh when I saw the real Billy Beane on the DVD extras... not exactly the same kind of guy, lookswise...).

The Baz Luhrmann "Romeo & Juliet". We thought daughter might like it (though I don't know why - she hates anything where people or animals die... she got quite upset about the trees in "The Lorax"). I think my favourite bit was this section. I guess my love of hedonism lives on... (not great quality clip, sorry):

This article about John Clare's poetry. I have tried to read Clare but never clicked with it really. Though I do like this bit from "The Nightingale's Nest":
"For here I’ve heard her many a merry year -
At morn, at eve, nay, all the live-long day,
As though she lived on song."

Well, I like the last six words anyway. It's a start.

Back next week some time. With, I don't know, maybe some thoughts on the Olympics opening ceremony... 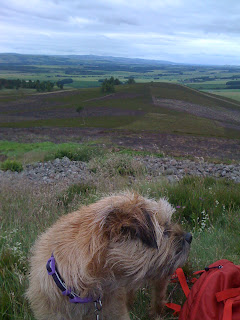 Out walking on the White Caterthun this week.

So, no big trip for us this summer... instead some visitors (a few already been and gone), a singin', actin', dancin' summer school (for the youngest member, last week, lots of fun) and really... just some being at home and taking it easy. Well, that's the plan anyway.

In amongst this, of course, there is reading and listening and absorbing this and that. Here a few things I've been in contact with so far:

I finally managed to read Barbara Kingsolver's "The Lacuna" (2009) that I bought ages ago. It is a fabulous read... and a must for all you Frida Kahlo fans (one review here). Art, history, censorship... it's all here.

It is the summer of sport here of course (what with the Jubilympics and all) and, amongst other things, the BBC are running a fascinating series of radio programmes telling various Olympic stories alongside songs (by Boo Hewerdine, Jez Lowe, Julie Matthews, Martin Simpson, Bob Fox and many others). The series is called "The Ballads of the Games". This week's episode was particularly emotional (it covers the 1936 Olympics in Berlin).

Still with sport there was of course some tennis on here in the UK not so long back. I don't watch that much of it (it was more my Mum's thing) but it's hard to ignore it all. Andy Murray, sadly, didn't quite make the top spot this year but another player (much less well-known) did OK. This is a lovely interview with British-English player Jonny Marray after his victory in the men's doubles (one of those everyone-said-I-should-give-up-and-now-look-what-I've-done pieces). Hurray for the loser-winners!

And finally, I haven't seen the film about young Leeds poets "We are Poets" yet but I did catch this poem from it. A stunning piece of work and film (poem by Joseph Buckley).