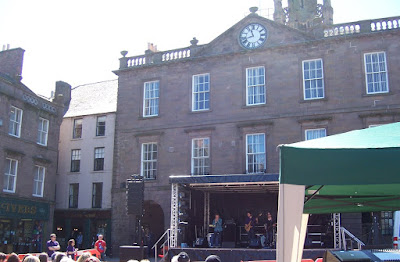 This is very new... prompted by finally watching the last part of BBC Scotland's 'The Promised Land' just recently (I didn't know it was going to be ALL about Montrose and its early twentieth century cultural clout...) and probably by the upcoming music festival MoFest here too (photo from a couple of years ago above). I've posted the words written below but I have a simple tune for it (and I quite like the chorus - listen here, it's just me singing... into the phone, one take, don't judge me). I'm never very good at differentiating verses from chorus and tend to use about three notes (and I've never claimed to be a singer...) but maybe a local songwriter (or two) can do something interesting with it (2 weeks till MoFest... high street ready by then... loads of time...). It could possibly take more Scotification - I have used bits of Scots and some local references but I'm sure others more local than me might be able to do more. It could certainly be sung with a more local sound than mine!

Non-Scots should note that 'stay' is used in Scotland where others would use 'live' (as in 'where do you stay?'). I am using 'stay' in both senses in this, kind of blended really. I snuck in a 'bide' (also a type of 'stay') at the last minute too. 'Close' is another double meaning - here 'closes' are the alleys /courtyards between houses (very much a feature of central Montrose).

Watch tides, at the waterside,
Sea sure for its share,
River fights, its course to keep,
Gulls float, going nowhere.

Flat lands, green against the blue,
Long days, long beaches,
Hearts wake, for a golden day,
What that might teach us.

Bide, close, can you hear the words?
Poets past, modelled faces,
Tall street singing high above,
These are our places. 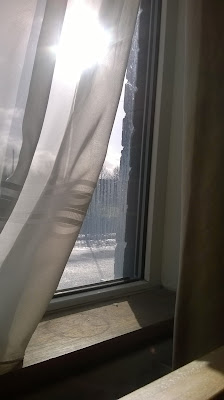 Yes, another window photo. And, lo, another poem.

She’s in a pocket;
Tucked in, safe hole,
Whatever rains,
It doesn’t reach her,
She hides her stupid head,
Pulls up her stupid knees,
Makes like a circle.

Hard times come round;
They knock, knock, knock,
They pull and push.
Her view is simple.
She waits them out,
The rips and stones,
Disguised as nothing.