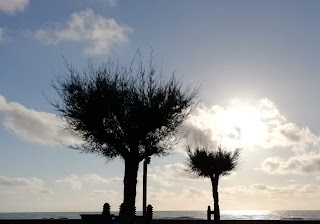 As someone who has dared to put poetry out into the world now and again, I have already been asked by various friends and acquaintances about the recent edition of the BBC radio programme Desert Island Discs (DID) that featured the poet John Cooper Clarke (JCC). I have been asked if I like him, did I listen, do I think he’s brilliant, all that sort of thing, but somehow I have found it hard to respond with anything like quick and easy answers. I was never a punk so didn’t come across him at gigs as many of my contemporaries did, but I have been aware of him for years now (thanks to the kind of media coverage few poets experience) and I have liked the poems I’ve heard. He is sharp, funny, like no-one else in poetry that I've ever come across and pretty much in alternative national treasure territory by this point so I don’t go into any kind of criticism lightly. And yet, here are some thoughts in response to the programme in a fairly long, easy-to-ignore blog post. Insert smiley face emoji here.

Firstly, yes, I did listen to the programme. I love DID (as presented by Kirsty Young or Lauren Laverne anyway, some of the earlier hosts have not lasted well…). I even wrote a poem about listening to the show a little while back. I’m not saying it’s a great poem (it’s not) – it’s just a tiny tribute. The show, at its best, is a marvellous thing (try the editions with Victoria Wood, Whoopi Goldberg, George Michael, Jackie Kay, Wendy Cope, Lemn Sissay and many more if you don’t believe me). There is a ‘klaxon’ thing on Twitter for ‘people who have just discovered Desert Island Discs’ and are very excited about it. Every episode is on the BBC i-player for those who have access to such things.

Also, yes, the JCC episode was a good listen. He is very entertaining (and I say that as a good thing - no snark at all) and he has had an interesting life (though to be honest most people have had interesting lives, this is not the preserve of writers and other success stories). Also JCC and I have some things in common (North of England raising, more illegal drug use than some, a tendency to go for laughs and dirt rather than other people’s ideas of perfection, a keen interest in music, songs and singers) and so, partly due to this, there are lots of things about his public persona that make me smile (the accent, the humour, the refusal to be simplistic about drug use – and I say ‘persona’ because I have no idea what he is like when not in public). I especially liked the section in JCC’s DID about his poem being used in The Sopranos because I remember being so thrilled and surprised when I heard Evidently Chickentown at the end of an episode. For that crabby Northern English voice to make it onto such a huge, influential US show – it meant a lot, it even sent the word 'Chickentown', sampled I suppose, into a poem of mine called Home is where (and that poem made it onto the first Poetry Bus magazine… hi Peadar!). So I am, in many ways, a fan.

But the problem for me in this interview came early on with the introduction of the thorny topic of poems and politics (or political poetry). The presenter (Lauren Laverne…another voice from the North of England, buckets of energy and excitement on her new Breakfast Show on 6 Music) started off with “Your poems aren’t political - Why not?” and I so wish she hadn’t. JCC’s answer (I suspect not for the first time) was: “Because I think the poetry and the politics suffer for it, you know, anyone who can be converted to a particular world view because of a poem (laughs) – I think they’re looking in the wrong places for whatever it is they want. But to hitch your poetry to any particular political wagon is always a mistake. Because poetry is forever – you write a poem and it’s out there and you can’t unwrite it and politically, well, you know, one can change one’s mind many times a day.”

So many points in there to disagree with! For a start he takes such a small (and I might also say old-fashioned) approach to the word ‘political’. Just by chance this week I came across another reference to the subject in a Barbara Kingsolver lecture from 1993 (Jabberwocky in the book High Tide in Tucson, 1995): “Cultural workers in the US are prone to be bound and gagged by a dread of being called political, for that word implies the art is not quite pure. Real art, the story goes, does not endorse a point of view. This is utter nonsense, of course (try to imagine a story or a painting with no point of view), and also the most thorough and invisible form of censorship I’ve ever encountered.” As an unashamed bleeding heart, I love Kingsolver's books. Like many writers and artists, she has a lot she wants us to think about, a lot she wants us to do something about and I don't think that's a bad thing.

I imagine JCC was not looking for a big debate about this, perhaps he was tired of being asked this question, perhaps he just isn’t interested in seeing things in this way but, for me, it does explain why I’ve liked some of his poems but never loved them. I like political poems (political art of all kinds) and partly because I see strong political content as making the work more interesting, not less. This doesn’t mean I want to read propaganda and I do also understand the argument that says people aren’t going to change their view because of a poem (although I think, in fact, that they often do, maybe not on the huge issues – “I was a fascist until I read Carol Ann Duffy but I’m OK now” – but political change can be, and more often is, a long, slow process and art can be involved in that).

Also political poetry isn’t only about changing minds but is very often about encouraging people, telling them they are not alone, telling an untold story, being the unheard voice, or part of a whole host of other political activities. JCC has been the unheard voice himself (in terms of the accent, the rebel, the unacceptable face of culture becoming the mainstream), though I’m guessing he’d rather not think about it in those terms (wouldn't we all love just to be amazing and divorced from our circumstances now and again?). As an aforementioned bleeding heart (and proud of it – I nearly called a book of poems ‘On my sleeve’) I will also go out on the stretcher that says that almost everything is political (in some way or other) – our decisions, our behaviour, the things that we don’t think are political at all – and in the current climate (indeed in any climate) I don’t think it’s honest, especially with writing, to suggest that you can escape this. You can think you are escaping it, for sure, but then you get ill and need to see a doctor (and guess what, politics has affected when you will be able to see one and if you will need to pay for it). Thinking that there is anything outside of politics is a story we tell ourselves to try to feel better (even to survive sometimes, in a bizarre twist) and it is understandable that we do this (now as much as ever) because so much party politics/political activity in the news is disgusting, on the one hand, and ridiculous, on the other. But of course turning away from it doesn’t mean it goes away. The stuff keeps on happening no matter how many box sets we hide behind.

So, all things considered I couldn’t really concentrate on the rest of the JCC DID after that ‘political’ start and that’s why I’ve found it hard to respond to in general conversation (not everyone wants an answer this long - largely people just want you to smile and say 'yes'). I do admire JCC in many ways (not that he cares about that I’m sure) and I suspect that, in part, like Bob Dylan, he initially resisted being put in a box that said ‘political’ because of the scene he was first associated with and some of the less than inspiring ‘political’ work he heard from others as part of that scene. But for me ‘political wagons’ are so necessary (what would we rather have – no progress, no rights, no welfare?) and, whilst I can love a love poem*, I do think a good political poem is one of the finest types of writing there is (see Adrian Mitchell’s To whom it may concern or Maya Angelou’s And still I rise for established examples, and yes, I went for Serena reading Angelou). Many poets writing just now are coming up with fierce company for these poems – and note I say ‘company’, not ‘rivals’ – again the words we choose are political in themselves and poetry does not need to be another battleground (we have plenty of those).

Just recently I was listening to my very favourite radio show (Sunday mornings, Cerys Matthews, BBC 6 Music) and one of her guests was the poet Raymond Antrobus. He read his poem Jamaican British and though I knew his name, that he had just won the Ted Hughes award and had heard him on the radio before, the poem he read (and a couple of lines in particular) just flew out at me (I won’t give you a spoiler – the poem is here if you don’t know it already). It is personal and political and there is nothing stronger. And Antrobus is just one of many exciting writers working today - go to any poetry or open mic event around the country these days and you will hear a lot of strong political work. Not all of it will be great of course…there will be clichés (there will always be clichés!) but that happens to everything we make, there are always weaker copies of great work, people just starting out etc. and I don’t think we should let a few half-baked poems put us off a whole kitchen. Political poetry is not a subgenre to be embarrassed about – it is a lively force, a necessary current, the source of much power and reassurance and hope and direction. Out and about, here, there and everywhere, there are new things being said, amazing turns of phrase and eye-opening changes. And we need them.


*Added later - we tend to differentiate between love poems and political poems but of course a love poem can be (and often is) political too.
Posted by Rachel Fox at 17:12 No comments: