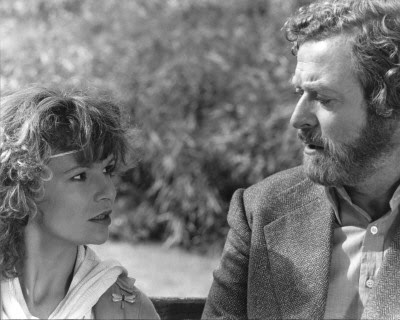 Not a lot to report here... still mainly posting other people's stuff to the new blog. Something a bit different there today...

Meanwhile I've been watching more movies than sometimes... catching up on the stuff taped over Xmas partly. I find a lot of films really average just now. I suppose that's natural — with so many being made you're only going to get a few really good ones and at this point in life I've watched so many that they all start to kind of merge together too — but I do sometimes envy our daughter who is at the super-enthusiast stage with films instead. She raves about her favourites, really looks forward to certain new releases, watches things over and over again. I still get enthusiastic about some music (see last post) but rarely about new movies. Even in Oscar/BAFTA season... no especially then!

And then I remember movies that I did adore when I was younger (maybe partly influenced by the whole Hopes and Dreams theme over there). When I was about sixteen, for example, I saw "Educating Rita" at a cinema in south London (somewhere like Bromley). It was in one of those tiny little screens (in the days when they were cutting old cinemas up into tinier and tinier pieces... before the multiplexes hit the UK) and I absolutely loved it. I can still remember how I felt when it finished... I just wanted to sit there and never leave. I certainly didn't want to talk about it with the rather annoying bloke I was with (kind of a blind date/friend of a friend's boyfriend thing...) although I imagine I probably had to. I suppose it was to be expected that I would like the film... I was an English Northerner (very much so), I was studying A level English (similar to Rita's studies in the film), I was a bit in love with one of my English teachers (in the days before I had any Gadar worth mentioning...)... but oh, I really adored it and felt like it was made just for me. It comes over as a bit dated now... but then... to a teenager like me... it was movie magic. This clip contains the bit I remember most... the whole thing about her family and friends and the singsong in the pub and how she feels she doesn't fit in there or with the university folk (again that's a bit dated now in some ways). I still think of it though... it even makes me laugh now sometimes when I'm at our folk club and I do sing along (bands like that at folk clubs... not so everywhere!). "Sing a better song..."


And "I'd drown myself"... still makes me laugh. And then cry. Good stuff.

Some of you will have heard this track already or seen the video (maybe even via my own link on facebook) but here it is again... certainly one of the best things I've seen and heard so far this year. The video is just so joyful! Listen out for Laura Mvula!

p.s. All good and busy still at the other-people's-stories blog... there's even a song there today too.