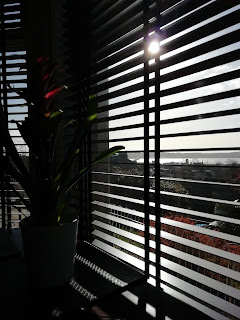 Around Xmas time last year I wrote a wee play about mental health, music and much, much more (sorry, alliteration is a sickness...). I think if this piece had a subtitle it might be 'Waiting for Barlow'. Nothing much as happened with it so I thought I'd post it here for anyone who wants a look.

A short play
for 6 actors

Setting
Five actors are lying on their backs on the stage. Their feet meet in the middle of the stage and they are spaced out in a circle like too many hands on a clock. The lights are low but spotlights shine on each one of the actors. Each one of the five is wearing a top (t-shirt/hoodie) in a different colour (one is in red, one blue, one purple, one green, one yellow).

BLUE
(impatient)
Do you not know the rest of that song?

RED
(annoyed)
Of course I do.

BLUE
Why don’t you sing it then?

RED
Because I’m a broken record, didn’t you know? That’s my thing.
BLUE
Oh, my god, I said that one time!

PURPLE
I think you mean ‘once’. And you’ve said it loads of times.

PURPLE
You’re welcome. I don’t see why you should get away with criticising Red. We’re all stuck here. None of us is any better than anyone else. Someone has to keep you under control.

BLUE
And it always (pauses) has to be you.

PURPLE
If the song fits…

BLUE
But they’re not even the right words to ‘Get Happy’! And is that really the best song to be singing? Here? Now? It’s crap enough just being here (spreads arms out) – we don’t have to turn it into some cheesy Andrew Lloyd Webber (waves arms) muuuusical shhhhhhow.

GREEN
I prefer ‘Get Happy’ to (warbles) ‘Memory’.

YELLOW
(laughs)
Or (sings, in an exaggerated way)‘I wore my coat…’

GREEN
Don’t, don’t! That song is the worst! As if I’m not in enough pain.

YELLOW
And I’ve never even seen (sings, over-dramatically) ‘The Phaaaantom of the Opera is’…

BLUE
(tight-lipped)
And now you never will, I’m glad to say. You two can’t sing for coffee.

RED
(half sitting up, leaning on elbows)
So, anyone know any good jokes?

PURPLE
I think we know the answer to that.

RED
(lying back down)
You know me – ever hopeful.

BLUE
Sometimes that’s you. Other times you think the world is coming to an end if anyone even dares to breathe near you.

GREEN
Well, isn’t it? And at least some of us have more than one mood. You’re just miserable and gloomy (spreads these last 3 words out in a droning voice) all… the… time.

BLUE
Show me something to be cheerful about, why don’t you? Got an exciting day planned? Going out to see the sights?
GREEN
Well…(pause). It’s not raining. It’s worse when it’s raining.

GREEN
And today my overall body pain is maybe only a 7 out of 10 so I am comparatively (sings – to Nina Simone tune) ‘feeling good’.

BLUE
(sarcastic)
Your positivity is so charming.

YELLOW
(reaching a hand out towards GREEN)
You know I’d do something about the pain if I could.
GREEN
I think we all want to help each other. It’s just so difficult.

BLUE
Speak for yourself. If I got a chance to get away from this stupid thing I would be off like the clappers, no looking back, no helping hand for anyone.

PURPLE
You say that. You think it makes you sound cool.

BLUE
By this point we’re all a little past cool, don’t you think? And p.s. could you stop trying to get all the votes for class president or whatever it is you’re after? It’s not like we could even get to the ballot box. The only one of us that ever gets to move is that Orange idiot and what a waste of freedom they are.

ORANGE
(from one of the back rows of the audience)
I can hear you, you know.

BLUE
See what I mean? Gets to swan about on legs and everything and does what with them? Sits up there listening to us in case we say anything a teensy weeny bit critical.

ORANGE
In fact it’s exactly that friendly, welcoming manner that keeps me over here.

PURPLE
How are you doing anyway? Seen anything interesting? Been anywhere?
ORANGE
(staccato, twitchy)
I’ve thought about a few things, had a few plans. But it was all too much. (ORANGE looks distracted). Everything’s so expensive. And it takes so long to get anywhere. And everywhere’s too busy. So I just stayed here.

GREEN and YELLOW together
P-I-S-S-I-N-G!

(RED, GREEN and YELLOW laugh)
BLUE
You should send that to Lloyd Webber. He might find a use for it.

PURPLE
I think that one needs a bit of work.

GREEN
You’re quite the expert. Seen ‘Chess’ have we?

BLUE
That isn’t one of his shows either. Jesus.

RED
That was though – (sings) ‘Jesus Christ… superstar…’

GREEN and YELLOW
(sings) ‘Can’t change the tyres on my grandad’s car’.

RED
I just like songs. I’m not so fussed about who they’re by.

BLUE
Well, you say that but even you weren’t keen on that Gary Barlow when he was here last year.

PURPLE
Yes, I think that’s one thing we can all agree on.

GREEN/YELLOW
(in squeaky high voices)
(not sung) ‘Whatever I said, whatever I did, I didn’t mean it…’

RED
I once had a dream where Robbie Williams was a dog who kept trying to shag my leg (waves leg in the air).

RED
It was quite disturbing. And dreams mean so much here that it felt like a waste.

BLUE
I’ve had it with dreams. I would so love something real. Real food…

BLUE
Anything. (calls up to ORANGE) Can’t you bring us something to eat? I can hardly remember what flavours feel like on my tongue.
RED
You know we don’t get anything. Sometimes I understand why, sometimes I don’t.

YELLOW
I never understand anything. But I suppose at least we have each other.

RED and GREEN
(sing ‘Dirty Dancing’ song, hold arms out) ‘I had the time of my life…’

BLUE
We get the point.

PURPLE
What would you rather we all do? Moan, moan and moan some more?

BLUE
Maybe we could try it… just once. See if it’s better than all the bloody singing.

ORANGE
Moaning is a really bad idea. It could all change at any time. You have to be ready, stay open to opportunity, be positive.

BLUE
I’m not sure I want to be lectured at by someone who has a way out and can’t even take it.

PURPLE
Leave Orange alone. What have they ever done to you?
BLUE
Wasted a chance, that’s what! While we’re stuck here. It’s not fair.

BLUE
It certainly does.

ORANGE
You’re so sure of everything. I can’t imagine what that feels like. I’m never sure about anything.

BLUE
It’s easy. ‘Are you sure you can’t get up?’ I say to myself. And look (BLUE tries to lift their body up off the floor), nothing. Stuck here like a giant fridge magnet.

RED
I dream I get up sometimes. I’m running around like a little kid, skipping, jumping.

PURPLE
I think we all have those dreams.

BLUE
Not me. I’ve just switched off that bit of my brain.

GREEN
No dreams at all? (Giggles) Not even sexy ones?

BLUE
Especially not those. What’s the point?

YELLOW
Dreams don’t have a point.

BLUE
Well, they do actually. They’re just your brain sorting out all the stuff it’s done in a day and working it all through. But as we never do anything here there’s nothing to sort out is there?

RED
You are the downer to end all downers.

BLUE
No song? No peppy pick-me-up with a jaunty tune? No (sings) ‘Oh what a beautiful morning?’ No (sings)‘Hakuna matata’?

RED
No, I think maybe you have driven any last joy even from me today. (RED rolls over to face the floor)

BLUE
‘Today’? Like we can tell one day from another. When did we last see the sun? Or a proper night?

(pause)
GREEN
How long do you think it’s been?

YELLOW
Thinking about that makes it worse, doesn’t it?

BLUE
Please tell me how this could be worse? Enlighten me! Really.

(pause)
GREEN
I can’t even think of any more songs. I’m trying to think of one but there’s nothing.

YELLOW
Me neither. Usually my head is full of them but I’ve nothing.
PURPLE
Well done, Blue. Another successful intervention.

BLUE
This is hardly my fault. I’m just honest, more honest than the rest of you.

ORANGE
Yes, you fill our tortuous time with all that refreshing, scintillating honesty. We’re so grateful.

BLUE
Oh, come on! Can’t you just (with sarcasm) ‘pack up your troubles and just get happy’? Can’t you ‘chase all your cares away’? What’s wrong with you all? What a bunch of losers (laughs)– no wonder you ended up here! This is the promised land, didn’t you know? This is exactly what we were promised. We just didn’t believe it. We thought there was no way it could be this crap. But it is.

ORANGE
But you can’t leave it like that. There are people watching us, hoping for signs, wanting answers, wanting endings.

BLUE
What people? I don’t see any people.

ORANGE
Here, look! (ORANGE moves along a row, faces of the audience showing in the spotlight) They can’t just leave here, get on the bus, go home to bed and think about this… How depressing!
PURPLE
They can go to the bar, I suppose.

BLUE
They’ve probably already been. I could never get through anything in the theatre without a few drinks inside me.

YELLOW
We’re in a theatre?

ORANGE
Well, you’re down there with all the others. That makes me jealous. Crowds of strangers just make me anxious.

BLUE
Everything makes you anxious.

ORANGE
Yes, except you, you just make me sad.

YELLOW
I’m nervous and miserable. What does that make me?

BLUE
Sometimes I wish I’d just said yes to ‘Big Brother’. It might have been more entertaining.

PURPLE
I think that’s the only show that’s not been made into a musical.
BLUE
I think you’ll find there was one in development a few years ago…

RED
I still can’t think of any tunes – not one. It’s like someone has sucked them all out of my head with a vacuum cleaner. Can anyone remember that Monty Python song? Something about life?

GREEN
Or some Proclaimers? They always used to cheer us up.

YELLOW
It’s true. I’m getting nothing. It’s like talk radio in my head.

PURPLE
But, you see, Blue, the days are different from each other after all. This, apparently, is the day we lost music.

PURPLE
Even the crap ones?

GREEN
Even the ones by Gary Barlow?
BLUE
There’s no need to get carried away. I still have some standards.

YELLOW
So what do we do now? I feel so empty.

PURPLE
Poetry it is then… I’ll start, shall I?