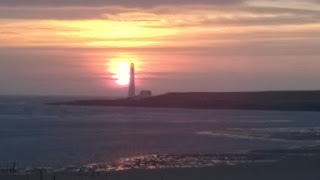 Scurdie Ness, near Montrose
So is it too early to start planning my Fun A Day Dundee project for next year (asking for a friend…)? I know the annual art making and sharing doesn’t happen till January but … there’s reading and thinking to do first, right?

After January 2021’s me-fest (a poem for every place I’ve lived – 31 in all) I’m looking in another direction this time and I welcome you to join in, contribute, come along for the ride. The plan just now is to focus on songs and, in particular, songs that I came across at the fortnightly folk club that I went to when we lived in the small Scottish/Angus town of Montrose (2004-18). I don’t know if there will be poems this time (maybe, maybe not, let’s see how it goes...). The idea for this focus came to me recently when I was listening to our music library on shuffle and heard a lovely song by a singer/songwriter that we heard at the club a few times (the first time in 2005). I hadn’t heard the song for a while (maybe years) and forgotten how lovely it was. Here’s the song (performed by the writer and his music/life partner – they perform as a duo, Dana & Susan Robinson, they live in Vermont, U.S.A):

There are quite a few folk songs called Safe Home, I think, but that’s my favourite (so far). And of course home has been something we've all had to think about more than ever in recent times. And it has been a really challenging time for musicians, especially those who aren’t mega famous and who rely on live gigs to keep their profile up and their fridges anything like full.

At folk clubs like the one in Montrose you get a mix of artists as the guest performers. You hear quite a lot of tunes/instrumental numbers (and I learned to appreciate them, folk club novice that I was in 2004) but it was always the songs that I was most interested in. Like many of us (maybe even most of us) I’ve been a song fan as long as I can remember and my tastes go pretty wide. At the folk club the songs played come under one of the following categories:

I’m currently reliving my trips to the folk club in Montrose (back to those pesky/useful diaries again) and trying to pick 31 songs to write about (again one for every day in January). I’m trying to focus on songs in the 4 and 5 category (but I may creep into 2 now and again as well) and I’m going to try to contact the songwriters (where possible). There are songwriters who may have been in 4 or 5 when I first went to folk club in 2004 but who have so many great songs that they are now making their way into category 2. The final piece of the puzzle is that I’d like people to have a go at covering the songs in question and doing a rough recording if they can (rough is good). It’s a collective project I’m talking about here… a folk club, a ‘sing in the round’ kind of a thing, if you like. On YouTube.

So please get in touch if you’re a folk clubber and have any particular memories of songs you heard at the club and have never forgotten (comment on here or on Facebook or wherever you find yourself – I keep trying to get off Facebook but so many of you are still only there and I don’t want to lose you!). Or if you fancy having a go at covering one of the songs let me know that too (very alternative versions always welcome). There is plenty of time to practise before January. I will print up a list of the songs when it’s ready (I’m on the 2008 diary today so it might be a couple of weeks till I’m done).

Safe home (unless you’re already at home in which case just thanks for reading). 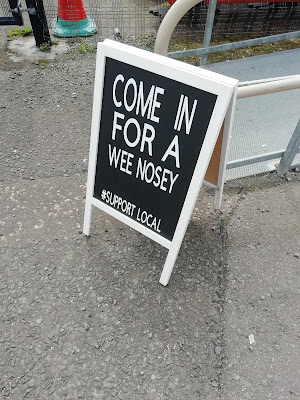 So, all the world's a podcast right now ... but blogs are still with us and here are a couple of newish ones that I can recommend to you (both of these are written by people I know pretty well).

A friend of mine and her colleague are setting off this weekend on a cycling trip from Land's End to John o' Groats. Follow their progress on a blog here. Donate to their fundraiser if you can here too.

Our daughter has been writing a blog for much of the lockdown era. She has a collection of theatre programmes and her blog concentrates on the musicals she's seen (with quite a bit of life added into the mix). Read her blog Heather Loves Musicals here. On Instagram you can even hear her sing a little bit of one of the songs mentioned in her most recent post.

I was quite caught up in the world of blogs a few years back. I started my first one at the end of February 2007 (this one - first posts here) and continued with it (pretty regularly) till 2011. I wrote about all sorts and did very little editing (I'd probably cringe if I read some of it now!). Lots of the other bloggers I interacted with regularly in the early days still have blogs going and you can see them in the list on the lower right hand side of the web version of this blog (you might not see the links on a phone/tablet version, I have no idea why). I also had a blog for the poetry events I organised 2008-2010 (here). Then in 2011 we had our family 6-month trip to North America and of course that had a blog too (this one). I still read that epic quite a lot (especially in recent months) and I'm glad I kept to the discipline of writing it for the whole trip. I do keep handwritten diaries too but they are pretty simple affairs (more to help the memory than anything) and the travel blog has a lot of detail (plus all the photos of course) and it can really make me smile (sometimes even laugh at my own jokes...). And on our return was I going to start up another blog..? Why, yes (the one you're looking at now...) oh and why not - another cup of coffee for the road - here's another one I put up for a long poem I wrote at the end of 2011.

There are lots of reasons why I continue with blogging (even if it is irregular these days - I'm on the computer a lot for other work now and the eyes get tired). I like the speed of it, the freedom, the ability to post about absolutely anything. I suppose they are a bit like sketchbooks and/or scrapbooks in that sense and you either like that kind of thing or you don't (and I do). I do put poems up on my blogs (sometimes when they're very new). I know this can affect how other places (magazines etc.) will publish your work but I have totally abandoned the 'sending poems to magazines' business. I did it quite a bit for years, had some success (a few such triumphs mentioned on my website if you're interested), and quite a few rejections, but it takes up such a lot of time and it wasn't for me in the end (it's a lot of admin and admin has never been my favourite activity).

Anyway, I've no particular poems to share with you today. Just thought I hadn't posted for a wee while so wanted to keep things moving on here. And if you haven't seen it on social media already here's a pic of the new Michael Marra mural in Lochee in Dundee (by artist Michael Corr). I've written about Marra on most of my blogs somewhere along the way, written poems about him, written about seeing him at live gigs, written about books about him. He died in 2012 but my goodness his music and his presence certainly live on, especially here in his home toon. 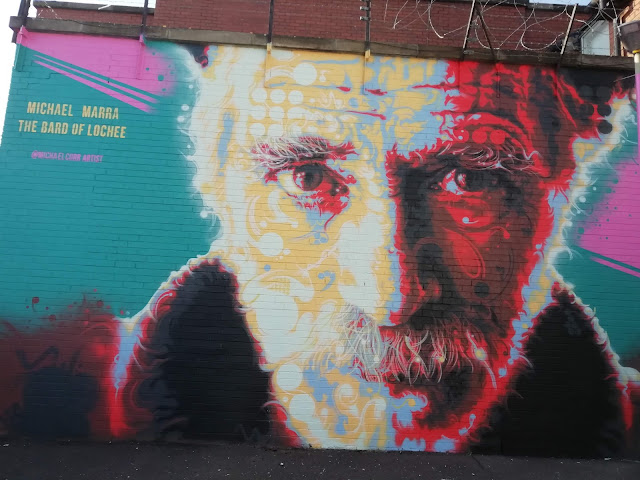