Save it for your blog, Howard 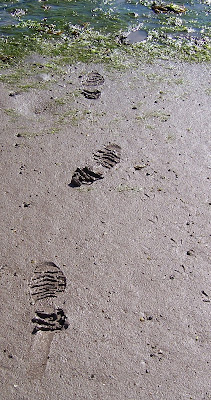 In the meantime please enjoy some of the first episode of the marvellous comedy series "The Big Bang Theory" (won't embed - go here and today's post title comes in at about 5 minutes 40 seconds... can't believe it started in 2007!). We are watching the show again and introducing it to a new audience. So why is it so good? Because it celebrates intelligence in a world that seems ever stoopider? Possibly. Or does it mock intelligence in a world that is ever brighter? We could debate... though I might not be here to answer much... possibly a good thing...
Posted by Rachel Fox at 11:39 17 comments:

Bones of the past 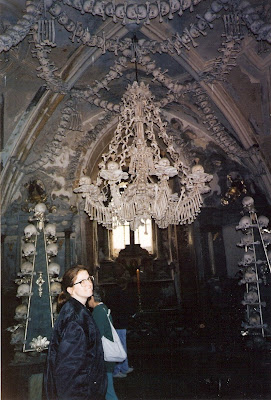 Chapel of All Saints, Kutná Hora, Czech Republic, mid '90s (me in huge jacket for some reason!).

So I have travel on my mind once again (though not at as much as this)... and that reminded me of a fairly bizarre holiday some time back in the mid 1990s (sorry, exact dates not a speciality in the 1990s for me... whole years are blurred...). For the holiday in question I went to the Czech Republic with my Mum (who must have been about 70) and, partly because she never went by plane (ever – she suffered high anxiety about all kinds of things... though you wouldn't necessarily know it even if you'd met her), we went on a bus trip. The bus looked like this (it broke down in Germany once or twice...): 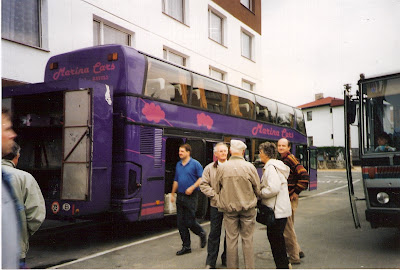 Whilst in Prague, we stayed with a "local host" – the man on the far right in the above picture in fact. His wife had left him so he had room. It was a great holiday in many ways – lovely weather and wanderings – and especially good day trips to places like Kutná Hora – home of the famous "bone church" (real name – Sedlec Ossuary) in the first picture. I'm not normally one for churches but this is possibly my favourite one ever. The bone decorations didn't spook me out at all... I just thought they were amazing... but I only seem to have that one photo now (you can see many more here).

Some time after the holiday I wrote a simple little poem about the trip. It's not the kind of piece that's ever going to go on any grand adventures itself (not magazine or competition worthy, I don't think) so I'll put it up here instead. Hope you like it: