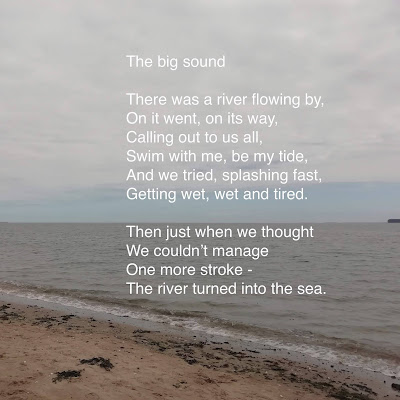 The above is a poem from a few years ago (text at end of the post in case you can't read photo poems). This week I added it to a recent photo of the mouth of the river Tay (taken in Broughty Ferry). I put it on social media – it didn’t make a big splash or anything. Still, here it is again.

I’ve lived near serious water since 2002 and I know it has a huge (positive) effect on my mental health. When I wasn’t mentally healthy it was feelings of being trapped that did a lot of the daily damage and living in a landlocked situation (in West Yorkshire) was something I was glad to change. When I didn’t live near the sea I wrote poems about photos of the sea (see Flat good – it’s about halfway down this page of little poems) and every chance I could I got away to water. I knew that just standing on a beach looking at the sea really helped me then and it still does. Lockdown without a river or the sea? Not sure that would have worked out so well for me… Congratulations to anyone who managed/is managing that.

Then this poem (The big sound). Sometimes when we write poems I think we have some quite clear ideas about what a poem is ‘about’ (even if it has other layers as well) but with this one I really didn’t have a clue. It just popped out and it felt like a poem (to me) but I couldn’t have said what it was ‘about’ or why it had appeared. I liked it enough to put it in my second little collection but it’s just floated around in there since then, not caused any waves (sorry … I guess I am a tabloid headline writer in another life*).

Then this week I was reading some Covid-19 news. Cases are rising, rising, rising in the UK and places are opening, opening, opening at the same time. I hear people saying they are keen for ‘the end’, for ‘normal’, and these are not things I really recognise but at the same time I know what they mean. And suddenly I remembered this poem and had another look at it, looked at the water, put them together.

When I posted it online this week an old friend said it seemed ‘about hope’ which is interesting because I think it gave me the exact opposite feeling! Moods and words are such odd beasts. It's all in the interpretation perhaps.

Also this week I wrote another poem for a wedding (a private commission). I haven’t written a huge amount since January but my goodness this one just poured out (and the person who commissioned it was super pleased with it too). In some ways it’s a small thing (woman writes poem) but in others it’s huge (for the people concerned, their big day and all that). I’m not married, I’m not a fan of marriage, but I am a fan of love and I can write about that till the cows swim home. So maybe The big sound is a hopeful poem. Maybe love is the big sea, and maybe love (in all its many forms) will get us out of this big fix … but until then here are some cows on a beach (coincidentally on the other side of the mouth of the river Tay). A friend and I took a long walk back in 2015 from Leuchars to Kinshaldie beach and then right along the edge of the water to the Tay road bridge. Just before Tentsmuir Point we were surprised to see a small herd of cows on the beach. Were we hallucinating? Were the cows on some kind of holiday? I don't think I've seen them since ... 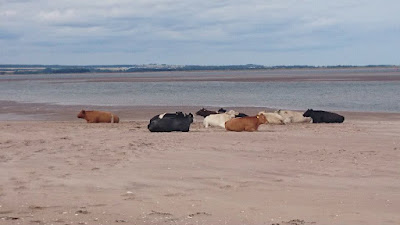 *Just kidding. The media in the UK is one of the most destructive forces we have. It is home to lots of souls who will, at some point I think, be in whatever hell looks like these days … Boris Johnson’s boudoir, perhaps. Insert vomit emoji here.

The Big Sound
There was a river flowing by,
On it went, on its way,
Calling out to us all,
Swim with me, be my tide,
And we tried, splashing fast,
Getting wet, wet and tired.
Then just when we thought
We couldn't manage
One more stroke -
The river turned into the sea.

I didn't necessarily see hope in the poem - in fact, I thought that the wet & tired people might be rendered entirely hopeless when for all their efforts they ended up in the sea (unless the sea was the destination). It's a good little poem - made me think!

I wonder if living near the ocean would make Mike's mental health better. He certainly loves it. It's academic though - as long as he is his father's primary caregiver we'll have to remain landlocked.

Yes, like you it felt more 'endless challenges' than 'hope' to me but I was glad someone else felt differently!

I can tell you guys love your holidays at the coast. I always love to see your pics as we stayed very near your usual coastal stay (we stayed at Dewey Beach in April 2011). The caregiving can be tough but it's a good thing to do. xx