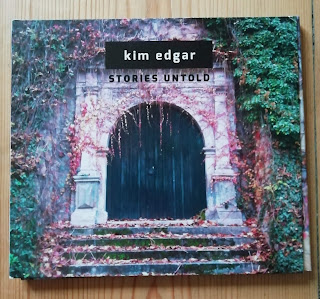 “words, once uttered, change the way we feel”

You can hear an audio version of this post here.

Today’s song is Tightrope written by Kim Edgar. Kim is a Scottish musician, songwriter and choir director (and a few more things besides – see her site for more details). She plays solo and with Cara, an Irish folk band from Germany, Scotland and Ireland. This track is on her 2016 solo album Stories Untold and as she specifically talks about the video here it is:

Again this song does not strictly speaking have a Montrose Folk Club connection. The only link would be that club-going led to radio-listening, which led me to Karine Polwart (see Day 21), which led me to an event in Dundee where Karine and Kim were both playing. So the first time I heard Kim was when she appeared at Dundee’s Out of the Woods in June 2008 (that event and its beloved organiser, Pauline Meikleham/Hynd have been mentioned a few times this month – mostly here). Kim, who plays piano, guitar and sings, was opening for the Polwart, Grace, Hewat trio and I think maybe Karine Polwart joined Kim for some of her set too*. It was a great night (pretty much guaranteed when one of Dundee’s finest, the fabulous Pauline, was involved). Kim and Karine were also then both part of The Burns Unit** (a group that had formed in 2006 after meeting at a Burnsong songwriting retreat). Later I remember seeing them all on the Jools Holland TV show (and according to YouTube that appearance must have been in 2011). 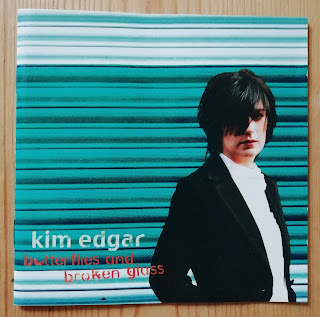 Some time after the Out of the Woods gig in 2008 I made contact with Kim (probably on MySpace, all the rage then, you know) and asked her to play at a poetry/music event that I organised at the Forest Café in Edinburgh in November 2008 (the event was called Postcards from the Song). That year Kim had put out her first solo album Butterflies and Broken Glass and that release has some great songs (my favourite is Just Outside Your Door). I think it was also around that time that she told me she had put a poem of mine called Significant Other Deceased to music, I think she maybe even played it at Forest Café (but that might be a false memory). It was a lovely surprise as we hardly knew each other, still don’t really (though we’ve met briefly a couple of times, emailed a few more). She says herself she’s pretty shy (I’m not saying that about her - it’s on her website!) and she has said she has to be encouraged to be more present online and all that kind of thing. I think she’d rather be playing the piano, writing, singing, teaching. Like many who come to music via less obvious routes she loves it very deeply. She studied English literature, not music, and, as far as I know, she didn’t come from a family with a big tradition of playing or anything like that. I think some people go into music because it just is what they do (they’ve grown up around it or they’ve been doing it from very young) whilst other people make a much more conscious choice (and that choice can be quite a daring leap in many ways). 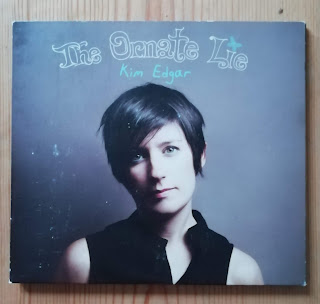 Some years went by, she had another album, 2012’s The Ornate Lie, and then Kim got in touch to tell me that the piece using my poem was going to be on her new (third) album – 2016’s Stories Untold. This was an even lovelier surprise and Mark and I went down to the album launch at Stockbridge Parish Church in August 2016. In amongst festival Edinburgh this event was an island of peace and a magical night out with a friendly, caring audience. It had a definite folk club feel (raffle, veg from an allotment as the prize) but the venue was a little flashier. Here is the piano waiting for Kim that day: 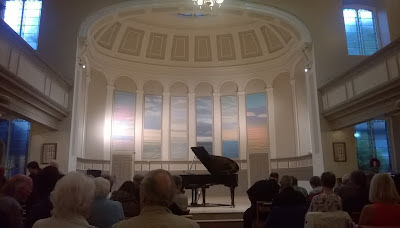 There are lots of lovely songs on Stories Untold – Anchor in the Sky, The Whole Rainbow (which is a cousin of Bella Hardy’s You Don’t Owe the World Pretty that we looked at back here perhaps), also Significant Other Deceased (of course!), Well Worn and today’s song Tightrope. Stories Untold is my favourite of Kim’s four solo albums so far but it might just be that it’s the one I know best. We heard her play in Dundee again in June 2017 so I’ve heard its songs live a couple of times – they are really effective, honest, and moving.

Tightrope is a gorgeous song and Kim’s voice is just perfect for it. So many of her songs feature her piano playing and I’ve only just realised as I listened through the albums again that I picked a purely guitar number (she plays that too). I should say for balance that another of my favourite pieces is the piano instrumental that finishes her most recent album (2020’s Held). That track is also called Held and is a beautiful, atmospheric number just calling out for a BBC (or Scandi) drama series that is looking for a theme tune… 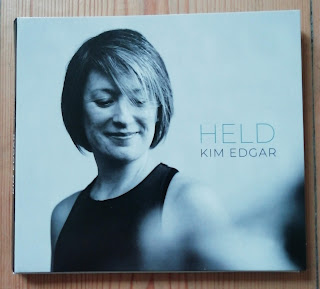 I attended the online launch for Held in December 2020 (well, I sat in relaxed clothing in our back room with a glass of something). Even online it managed, like her launch in 2016, to be friendly and fun. There were singalongs, smiles, tears. Held has some lovely tracks – Give It Time, Shelf, Some Things Happen. All her albums are in her shop here.

Songwriting is hugely important to Kim and she is currently working on a giant collaborative writing project called Consequences that involves her working with a different songwriter every month (details here). So far the collaborators have been Ron Sexsmith, Horse McDonald and Boo Hewerdine*** with another track released next week. On any of her social media (or her website) you can keep track of all the songs as she releases them and you can pre-order the album here.

And now here’s Kim to answer questions about Tightrope.

When did you write this song?

I wrote it in my (then) flat in Leith, in Edinburgh. The starting point for me was my literal fear of falling, and what that might represent. I wanted to admit to myself, and publicly, that I find it hard to ask for help when I need it, and I don't like to show that I'm scared or vulnerable. It's strange, because I really do try make myself vulnerable and open in my songwriting, but I find it hard in real life ...

Who performed and/or recorded it first? What year was that?

Me, I think! I performed it live in advance of recording it for my album ‘Stories Untold’, which was released in 2016.

Any other versions of it you know of? Any you particularly like?

There aren't any other versions of it that I know of - though I'd love it if there were! It's always a great compliment when someone covers one of your songs . But I did make a music video for the song in 2017 with members of Freedom Of Mind, a choir which grew out of a project at FDAMH - Falkirk's Mental Health Association (and subsequently became an independent community choir with a mental health focus in 2019). I really love the video, which was beautifully filmed by Louise Mather, and shows the choir members holding up a word to represent how they are feeling. They were so honest and I feel the video is very powerful as a result.

I do have good feelings about the song, yes. I hope that there might be other people who are also struggling with showing vulnerability or asking for help, and that the song might be helpful to them.

Have your feelings about the song changed since you wrote it?

They have. Sadly, my dad became ill in late 2016 (when I released ‘Stories Untold’) with a cancer of an unknown primary source, and so that album, and its release tour, is tied up with memories of his illness. Despite his hugely positive approach, I'm sorry to say that my dad had died before I made the music video. The song for me now is strongly associated with my work with the choir through that difficult time; though I was really struggling personally, being able to co-lead Freedom Of Mind on a weekly basis gave me a real sense of purpose and solidarity, and that's why I chose to write "vulnerable" and "supported" for my words in the video. The choir is such a supportive space to be for all of us who are involved in it, I think - we sing because it makes us feel good.

What is the song you’ve written that you are most proud of?

Ooh, I've never thought about that before! Good question. ‘Scissors, Paper, Stone’ from my first album, ‘Butterflies And Broken Glass’, I think ... I wrote it to try and encourage someone I didn't know too well to get out of a very unhealthy relationship. And although I don't think she ever heard the song, I'm glad to say she did get out of the relationship! I feel proud of it because of the number of people who have told me after live performances how affected they have been by the song or how meaningful it is to them.

Could you name me one song by someone else that you wish you’d written?

I absolutely love ‘A Case Of You’ by Joni Mitchell. I think Joni's ability to capture emotions is exquisite, and this particular song had a profound effect on me when I first heard it in 1994 as an encore at a Tori Amos concert in Edinburgh's Queens Hall. Tori didn't introduce it, and (pre-internet access!) it took me a few more years (and a mix tape from my art teacher at high school!) to discover the song's name and its songwriter. I then listened exclusively to Joni's ‘Court And Spark’ and ‘Blue’ albums for around seven years ... The song is beautiful, with powerful imagery and it's emotionally open, and honest. If I had to listen to one song for the rest of my life, this would be the one. I hope to keep learning, and to work towards this in my own songwriting.

Thanks so much to Kim for answering questions about her song. And tomorrow it’s back up to Angus for a songwriter who grew up in Montrose.

*Karine (and many of her band and collaborators) crop up on most of Kim’s albums somewhere.

**Full list of the Burns Unit members in their first album review here.

***Yes, that’s another square on this month’s Boo Hewerdine bingo card (read about songs of his here and here).

This post is part of my Songs That Stick project for 2022’s Fun A Day Dundee (a community arts project that takes place every January). Anyone can take part (you don’t even have to be local to Dundee) and much of the work can be found on Instagram during January (use #FADD2022). There is usually a real-life exhibition later in the year (though this has been online for the past 2 years). The full list of songs I am writing about this year is here. My first post about why I picked this project this time is here.

If you are interested in my Fun A Day Dundee projects for 2020 and 2021 you can start here and here. They are quite different to this one (a short poem and drawings in 2020 and lots of poems and writing in 2021).