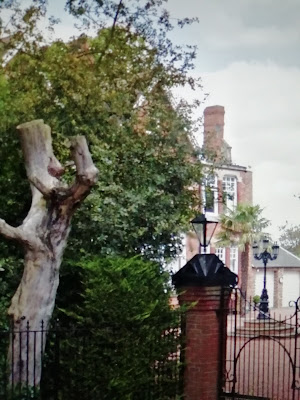 Beds. So many beds.

It was a big house, a rambling family.

Some ghosts, some still around.

In the surgery downstairs,

This was the only place

of having two living parents

and somewhere in a corner,

Hobby horse to the wild,

Out there I was free -

free as a child

And if you’re interested, here’s a little background on my first home (my memories are not necessarily accurate so other memories are welcome too):

I was born in one of the bedrooms of this first address in 1967. My Dad was a village GP (though it was a midwife who assisted at the birth) and his surgery was part of the house too (downstairs with a separate entrance at the back). Both my parents had been married once before and widowed. They both had children from those first marriages (my Dad three daughters, my Mum one son) but as they are all a good bit older than me none of them lived at home much in my lifetime. My parents adopted one more child together in the mid 1960s (my closest sibling in age) and then I was a … late addition.

This home was, I think, an Edwardian house in a large village called Middleton St George just outside the town of Darlington in the north of England. It looked very different to the smart place you see in the photo/video (these both use Google Street View so are fairly recent images). I remember it as a bit more chaotic and even ramshackle than that – in my time one room was kept tidy (and hardly used) but the rest was very lived in. I remember learning to ride one of my brother’s old bikes on that drive (gravel then, not the easiest surface) and I think I even remember a brother running alongside/behind as I learned, as parents more often do. The setting was all fields, what seemed then like a mighty river further down the village and a corner shop (where I remember spending my last old pennies before decimalisation in 1971). It is true what they say about most kids having more freedom in those times. I really did wander around the village on my own at about 5 years old (at least that’s how I remember it) and I went exploring with friends of a similar age too (building sites, riverbanks). We were lucky, I suppose, in that the roads were quiet and none of those adventures had sad endings.

I wasn’t aware of it at the time but my Dad had mental health problems for most of my childhood so I hardly saw or knew him at all (and that, no doubt, contributed to the feeling of chaos in the house). He died in 1973 and we moved house not long after.

This poem is part of the annual Fun A Day Dundee project where participants try to do something creative every day for the month of January. You don't have to be in Dundee to take part and there are other Fun A Day projects around the world. People post as much of their work online as they want to (largely on Instagram but it can be elsewhere too). In January 2020 I wrote a 31-word poem and posted a drawing to illustrate a word of it every day for a month (more info here). This year I am posting a whole poem a day (one poem for each of the 31 addresses I have lived at, covering the period 1967-2021). Videos of the poems show the places remembered in the poems but were taken from recent Google Street View. The videos are on my Instagram, maybe elsewhere too. Use the hashtag #fadd2021 on social media to see other people's online contributions.

I am going to enjoy this walk down your memory lane. I knew that you had lost your father when you were younger, but I didn't realize how young. And I didn't know you had so many siblings (step or otherwise!).

Yes, we were quite the alternative Waltons...

Thanks, as ever, for being around, Dana!
x