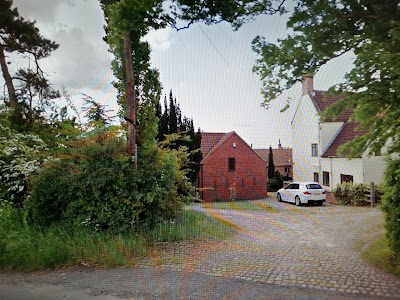 The worst décor of my life;

Squashed in a Mini Metro

with a maxi instructor,

in the Nottingham Yates’s Wine Lodge.

It is an odorous establishment,

even early in the day,

but you can buy our fresh company

with tips and Chinese meals.

In this long, uncool summer

I am pickled in pink,

RF 2021
For the summer after my first year at uni my Mum (and therefore what I called ‘home’) was still in London (the flat from Day 8 of this project) but at some point in about 1988 she decided she’d had enough of city life and started making her way north again (this time to the Newark/Notts area). So, for some of the summer of that year I joined her in a temporary rented cottage just outside a small town in Nottinghamshire (temporary because she was waiting for her new home to be ready). From what I remember the cottage was very pink and flowery inside (not my Mum’s usual style up to this point, though she did go a bit more floral as she got older). You can’t see much of it from the google pic at the top of the post (it was part of a group of farm buildings). 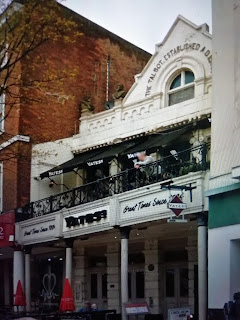 I had a job in Nottingham that summer and I learned to drive in Newark. The job was daytime shifts in the pub mentioned in the poem (pic above from google though it’s now changed to a Slug and What’s it). Early doors was all serious alcoholics and most of them over 50. The staff were mainly young, like me at the time, and though we all drank we were pretty horrified by these older career drinkers, the state of their hygiene, the amount they could drink. One was a North American academic of some kind, who said he'd known the poet Robert Lowell. He lived alone in the YMCA and he used to take some of the staff out for drinks and meals after shifts (we always went in groups, never alone, though he was interested in the young men, not me). He always paid. It was interesting but uncomfortable as we knew we were all just there to get what we could from him (free meals).
Not connected with those outings, I started another huge relationship that summer (well it meant a lot to me) and, from what I remember, did absolutely no studying whatsoever (you won’t be surprised to hear how great my finals results were come summer 1989). I know in some ways that was a waste and someone else could have had that place and possibly got more out of it. A relative had once said to me when I was about 17 ‘get into Oxford or Cambridge and you’ll never need to work again’. I think he was partly joking but in retrospect I probably took this too literally, at least for a while, and kind of floated aimlessly once I was there. I watched too much TV. I stared at walls. It was quite relaxing but not helpful for career progression. I had absolutely no idea what I wanted to do after uni and it was starting to worry me a little. Would I end up in Yates’s as a career customer in my 50s? It wasn’t completely out of the question...
Tomorrow, back into uni accommodation for the final year...
This poem is part of the annual Fun A Day Dundee project where participants try to do something creative every day for the month of January. You don't have to be in Dundee to take part and there are other Fun A Day projects around the world. People post as much of their work online as they want to (largely on Instagram but it can be elsewhere too). This year I am posting a whole poem a day (one poem for each of the 31 addresses I have lived at, covering the period 1967-2021). Videos/photos of the poems show the places remembered in the poems but were mostly taken from recent Google Street View. The videos are on my Instagram, maybe elsewhere too. Use the hashtag #fadd2021 on social media to see other people's online contributions.
Posted by Rachel Fox at 08:50